Automation – The future of jobs is not deterministic, but needs to be shaped

Fundamental changes in technologies and production systems and the emergence of new industries are major drivers of growth and development. They have the power to transform the world of work by destroying jobs, generating new ones and transforming the nature of jobs. Hence, ever since the Industrial Revolution, workers, business people, policy makers, and academics have been ambivalent about technological progress. The recent wave of technological change is once more garnering widespread attention and has created a controversial debate on the future of the world of work. Some believe that the new wave of technological change and innovations will destroy jobs at a massive scale, and foresee a jobless future. In contrast, optimists are confident that new technologies will mobilise adjustment and transformative processes that will create new jobs, and even “golden ages” of job creation . This optimism is supported by historical experience. Economic historians show that, while each new wave of technological change has created phases of job destruction and technological anxiety, eventually, new and better jobs were created.

History, however, does not always repeat itself, and some observers believe that we are currently witnessing a critical departure from the historical pattern of techno-economic change. They highlight the unique and highly disruptive nature of newly emerging technologies and the unprecedented pace of change. The combined effects of multiple new technologies such as multi-functional sensors, learning robotics, the Internet of Things or 3D printing, are expected to be deep, wide in scope and large scale and therefore, to generate unprecedented loss of jobs.

While the future is uncertain, central issues in analysing the impact of new and emerging technologies on jobs in the future are therefore to understand the link between new technologies, innovations and jobs, identify the forces and mechanisms that destroy jobs and those creating jobs, and the linkages and interaction between them.

This paper develops a framework to explain the process of jobs destruction and jobs creation by integrating insights from different traditions in economics – evolutionary, structural and market economics. This approach allows to take into account different types of innovations, short- term and long-term as well as revolutionary and evolutionary adjustment processes, the role of economic, social and political forces, and the complex, non-linear and uncertain nature of the process. 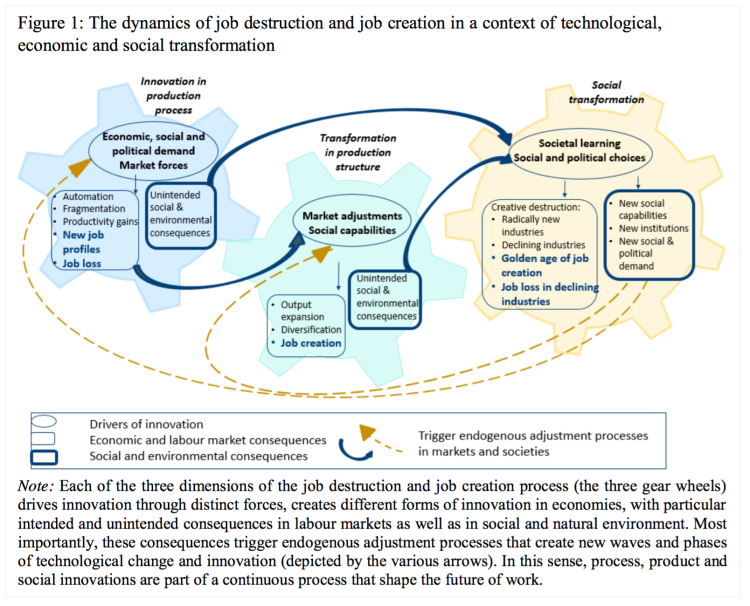 The framework shows that technological change and innovation is a complex, non-linear and non-deterministic process which comes in waves and different phases, and thereby destroys and creates jobs.

The framework discusses automation and fragmentation of production processes as two forms of process innovation that have triggered waves of job destruction in the past. The creation of jobs is explained endogenously as the result of adjustment process. Process innovations generate unintended consequences which trigger job-creating adjustment processes. In the short term, market forces create new jobs by expanding markets or diversifying into new goods and services. The outcome of market processes, however differ substantially across countries. Country-specific social capabilities determine and limit the range of products a country can feasibly develop, and the jobs it can create.

Most importantly, this framework shows that a golden age of job creation – the generation of new jobs at a massive scale – requires transformative changes, the emergence of new growth sectors and a process of creative destruction. Such fundamental changes cannot be achieved by markets. They require new social and political choices and new social capabilities, which can only be developed in a process of societal learning and social transformation.

A major conclusion of this paper is that the future of jobs is not deterministic. Governments and social partners are challenged with shaping the dynamics of the technological, social and economic transformation process that generates new jobs. Empirical analysis of recurrences suggests that developed countries are currently positioned at the turning point where they are challenged to move from a phase of net job destruction to the next phase of net job creation.

This paper concludes that we can be confident that history will repeat itself also this time and create new jobs if societies will be able to mobilise a learning process that generates a new vision on the way forward and on development goals, and a common understanding of how to move towards this future. Institutions that support social dialogue and societal learning will therefore play a central role in generating transformative product innovations and new jobs. Finally, research on new technologies and the future of jobs needs to broaden its focus. While the current focus is on job destruction, researchers and policy makers needs to gain a better understanding of the job-creating process, and how public policies can effectively shape them. This implies that research needs to shift attention from the “technical” to the social and political dimension of technological change, innovation and job creation.

Like Loading...
« Older Workers in UK – Workplace innovation practices
Refugees in Europe – Good education helps, but less than for native-born »