But this worldview now appears to be out of date. Years of steady change in wages, productivity, energy costs, currency values, and other factors are quietly but dramatically redrawing the map of global manufacturing cost competitiveness. The new map increasingly resembles a quilt-work pattern of low-cost economies, high-cost economies, and many that fall in between, spanning all regions.

In some cases, the shifts in relative costs are startling. Who would have thought a decade ago that Brazil would now be one of the highest-­cost countries for manufacturing—or that Mexico could be cheaper than China? While London remains one of the priciest places in the world to live and visit, the UK has become the lowest-cost manufacturer in Western Europe. Costs in Russia and much of Eastern Europe have risen to near parity with the U.S. (See Exhibit 1.) 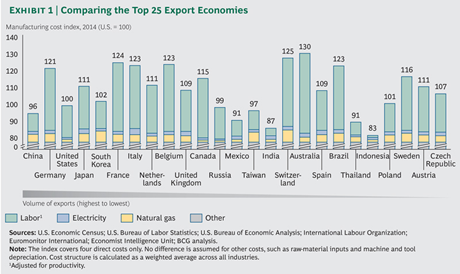 Reshoring in US – Call center jobs are coming back

After years of sending call center jobs overseas, companies are bringing the jobs back to America. Customers demanding better service and more use of social media to field questions are helping fuel the trend.  Nearly 1,000 new call center jobs are planned at companies near Detroit. Dialog Direct, which already employs 2,000, announced plans to … Continue reading →

For the past eight years, manufacturers in Canada have been fighting an uphill battle. From the downturn of the US economy and the rising Canadian dollar, to skilled labour challenges and off-shoring trends – manufacturing here has faced tough headwinds. Today, times are finally moving in a direction that helps rather than hinders manufacturers, according … Continue reading →

Although no one keeps precise statistics, the retreat from offshoring is clear from various sources, including federal data on assistance to workers hurt by overseas moves.  U.S. factory payrolls have grown for four straight years, with gains totaling about 650,000 jobs. That’s a small fraction of the 6 million lost in the previous decade, but … Continue reading →

Reshoring in US / How Walmart says it will do

In January 2013 at the National Retail Federation’s annual convention Bill Simon, President, Walmart US, promised to bring back manufacturing to the United States. He promised that in 10 years $50 billion in goods would again be produced in the United States. Continue reading →

Apple Inc. (AAPL) said it’s opening a new plant in Mesa, Arizona, that will create 2,000 jobs to make components for its products, part of a push by the world’s most valuable company to boost manufacturing in the U.S. Apple struck a deal to pay $578 million to GT Advanced Technologies Inc. (GTAT) to supply … Continue reading →

Reshoring in US / More Manufacturing Coming Back

Offshoring, technology advancements and low growth have contributed to a massive reduction in IT jobs in Europe, with almost half the number of IT roles in the largest companies expected to exist in 2017 compared to 2002. According to research from The Hackett Group, in 2002 there were 1.6 million corporate IT jobs in the … Continue reading →

Reshoring in US / A nascent trend ?

Recent days have produced a steady drip, drip, drip of good tidings about new jobs on America’s factory floors. Apple, Lenovo, LG Chem, and now Daimler AG have all recently said they plan to add manufacturing jobs in the US. President Obama hopes it’s a sign of the times, but economists say it’s, at best, a … Continue reading →