15$ Federal Minimum Wage in US – Most Americans support it

About six-in-ten U.S. adults (62%) say they favor raising the federal minimum wage to $15 an hour, including 40% who strongly back the idea. About four-in-ten (38%) say they oppose the proposal, according to a Pew Research Center survey conducted April 5-11.

The Biden administration and many congressional Democrats favor increasing the federal minimum wage to $15 an hour from the current rate of $7.25 an hour, but the proposal’s fate in the Senate is uncertain. Some senators, including several Democrats, support a more modest increase in the wage. 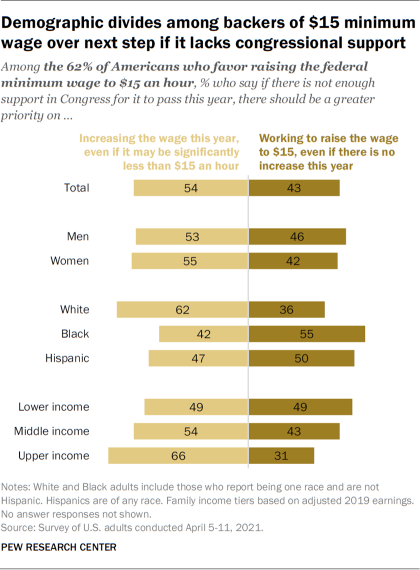 Minimum Wage Workers in Canada – The proportion of employees earning minimum wage grew from 5.2% to 10.4% in 20 years

This report looks at the evolution of minimum wage prevalence over the last 20 years, using annual estimates from the Labour Force Survey (LFS). It examines changes in the profile of minimum wage employees, first through a series of gradual minimum wage increases observed from 1998 to 2017, followed by notable increases in 2018. It … Continue reading →

Using data from the Current Population Survey, Jeffrey Clemens of the University of California, San Diego, and Michael Strain of the American Enterprise Institute find that some employers in the low-wage labor market pay workers less than the minimum wage. Examining a series of minimum wage increases from 2011 to 2019, the authors estimate that … Continue reading →

The federal minimum wage of $7.25 per hour has not changed since 2009. Increasing it would raise the earnings and family income of most low-wage workers, lifting some families out of poverty—but it would cause other low-wage workers to become jobless, and their family income would fall. This interactive tool allows users to explore the … Continue reading →

Minimum Wage Workers in Canada Over the Last 20 Years

In recent years, discussions surrounding the minimum wage, and its increase, have been at the centre of Canadian current affairs. The renewed interest in this topic stems mainly from high-profile campaignsNote  advocating for a federal minimum wage increase to $15 per hour,Note  as well as recent notable minimum wage increases in Ontario, Alberta and British … Continue reading →

Peter Weltman, Financial Accountability Officer of Ontario, has just released a commentary Comparing the LIFT Credit to a Minimum Wage Increase. “The LIFT credit will provide fewer benefits to minimum wage workers than increasing the minimum wage from $14 per hour to $15 per hour,” says Weltman. The Province introduced the LIFT credit to provide … Continue reading →

This Monday, the 1st April, 2 million people working minimum-wage jobs will start the week with a pay rise. The National Living Wage (NLW), the rate that applies to 25+ year olds, will rise by 38p, from £7.83 to £8.21. We project that this will increase the number of people paid at the wage floor … Continue reading →

Minimum Wages in US – Three conclusions on the impacts

Minimum wages have been studied so extensively that it is rare to find a fresh angle that piques labor economists’ interest. Despite a mountain of literature, advances in empirical methods, and the availability of new data, definitive studies are scarcer than policymakers would hope to find. The empirical challenges researchers of the minimum wage face … Continue reading →

On 1 January 2016, the Irish minimum wage (MW) increased from €8.65 to €9.15 per hour, an increase of approximately 6 per cent. Using data from the Quarterly National Household Survey (QNHS) for the years 2015 and 2016, we estimate the effect of the increase in the minimum wage on the hours worked and likelihood … Continue reading →

Their Minimum Wage in US, 2019 – Many States and Cities raise it

The federal minimum wage has been $7.25 for a decade, but many states have a higher rate and some wage hikes will take effect this year. We’ve rounded up the latest news on what employers need to know for 2019. Here are SHRM Online resources and news articles from other trusted media outlets. Nineteen states increased their … Continue reading →

The term ‘minimum wage’ refers to the various legal restrictions governing the lowest rate payable by employers to workers, regulated by formal laws or statutes. This report provides information on statutory minimum wages that are generally applicable in a country and not limited to specific sectors, occupations or groups of employees. While the scope of … Continue reading →

Minimum Wage Increases in Seattles – The increase from $9.47 to $13 per hour raised earnings by an average of $8-$12 per week

Using administrative employment data from the state of Washington, we use short-duration longitudinal panels to study the impact of Seattle’s minimum wage ordinance on individuals employed in low-wage jobs immediately before a wage increase. We draw counterfactual observations using nearest-neighbor matching and derive effect estimates by comparing the “treated” cohort to a placebo cohort drawn … Continue reading →

Women are disproportionately in low paid work compared to men so, in the absence of rationing effects on their employment, they should benefit the most from minimum wage policies. This study examines the change in the gender wage gap around the introduction of minimum wages in Ireland and the United Kingdom. Using survey data for … Continue reading →

Minimum wage in South Africa – Not a living wage

On Wednesday, the South African Federation of Trade Unions (SAFTU)—which represents 30 unions with around 800,000 members—organized marches in six South African cities with thousands of participants protesting the government’s proposed minimum wage legislation. The current minimum wage proposal, which was approved by the cabinet in November 2017, calls for a 20 rand (R) ($1.60) … Continue reading →

For decades, economists have studied the effects of the minimum wage on employees in the United States. These studies have largely focused on the employment effects for low- skilled workers – with the principal focus on teenagers. Overall, there is some controversy regarding whether disemployment effects exist, with some studies finding no effects,although with more … Continue reading →

This note reviews the channels through which minimum wage increases can affect Canadian economic activity and inflation and assesses the macroeconomic impacts of the scheduled provincial minimum wage increases in the coming years. The key results are as follows: • The macroeconomic impacts of these measures may be significant because about 8 per cent of … Continue reading →

This brief on Seattle’s minimum wage experience represents the first in a series that CWED will be issuing on the effects of the current wave of minimum wage policies–those that range from $12 to $15. Upcoming CWED reports will present similar studies of Chicago, Oakland, San Francisco, San Jose and New York City, among others. The … Continue reading →

The city’s escalating minimum wage has meant a slight increase in pay among workers earning up to $19 per hour, but the hours worked in such jobs have shrunk, a study commissioned by the city found. It estimates there would be 5,000 more such jobs without the Seattle law. The UW team published its first … Continue reading →

Minimum wage policy attracts an enormous amount of attention in the United States. Between January 2014 and July 2015, the effective minimum wage in- creased in 26 states, and as of January 2015, 75% of Americans supported an increase in the federal minimum wage to over twelve dollars per hour. Researchers have responded to this … Continue reading →

Minimum Wage in US – Gradually raising to 15$ by 2024 would directly lift the wages of 22.5 million workers

The federal minimum wage was established in 1938, as part of the Fair Labor Standards Act (FLSA), to help ensure that all work would be fairly rewarded and that regular employment would provide a decent quality of life. In theory, Congress makes periodic amendments to the FLSA to increase the federal minimum wage to ensure … Continue reading →

Sub-Minimum Wages in OECD – Of the over two-thirds who have a statutory wage, just under two-thirds have special rates for young people (15-24)

The ESRI and the Low Pay Commission jointly published “A Study of Sub-Minimum Wage Rates for Young People”, a new report that examines international practice on the extent to which sub-minimum wage rates are paid within National Minimum Wage (NMW) frameworks and how such wage rates are generally designed. The report also uses historical data … Continue reading →

Beginning in 2007, there were two major developments in the U.S. economy. The federal minimum wage rose in steps from $5.15 to $7.25 per hour, and overall employment growth slowed significantly as the country began its descent into the Great Recession. A recent paper by Jeffrey Clemens and Michael Wither argues that the national minimum … Continue reading →

US – Where voters could raise minimum wage

With the U.S. economy on the upswing, voters in Arizona, Colorado, Maine, and Washington are set to vote on increases to those states’ minimum wages by as much as 60 percent over the next few years, adding to nationwide momentum that has lifted wages for low-income workers significantly.   Chosen excerpts by Job Market Monitor. Read … Continue reading →

Minimum Wage in US – Only 5 percent of all employers believe the federal minimum wage ($7.25 per hour) is fair

Three-quarters of Americans (75 percent) are living paycheck-to-paycheck to make ends meet, according to a survey from CareerBuilder. Thirty-eight percent of employees said they sometimes live paycheck-to-paycheck, 15 percent said they usually do and 23 percent said they always do. While making ends meet is a struggle for many post-recession, those with minimum wage jobs … Continue reading →

Like Loading...
« Covid in Western Europe and US – Government-sponsored job and skills training for workers garners the highest shares of support
Future of Work – The roles of higher education, further education and lifelong learning »