US / Job openings and unemployment are both worsening 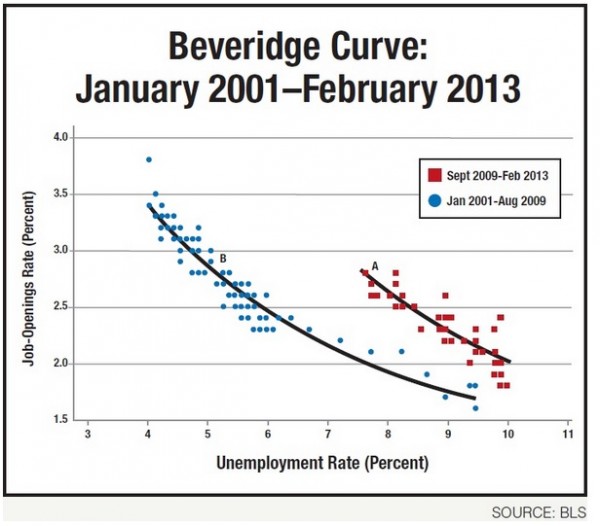 It has been almost four years since the end of the recent recession, but the U.S. has yet to return to its previous levels of unemployment. The shift in the Beveridge curve suggests that it may never do so. The points labeled A and B illustrate why. In February 2013, the job-openings rate (unfilled jobs as a percentage of total jobs) was 2.8, a rate that would have corresponded with an unemployment rate of about 5.2% on the Beveridge curve from 2001 through August 2009. The unemployment rate in February, however, was 7.7%—almost two and a half points higher.

Hassett argues the shift is mainly explained by a) the more than doubling of long-term unemployment from pre-recession levels, and b) the now-documented reluctance of business to hire folks who’ve been out of work for more than six months.

via America’s broken jobs machine and the long-term unemployed | AEIdeas.

US / The Beveridge Curve is shifting

In an article on Thursday’s front page, I wrote about how long job vacancies are taking to fill, especially when you consider the abundance of unemployed workers. Economists have been thinking about this issue for a couple of years now thanks to a shift in what is known as the Beveridge Curve. No, the Beveridge … Continue reading »

US / Labor Economics / Is the the Beveridge curve shifthing ?

When trying to determine if high unemployment is being caused by weak demand or by a mismatch between jobs and the skills of job seekers, economists look at the Beveridge Curve. It represents the relationship between the unemployment rate and the job vacancy rate. On a simple chart, vacancies are on the vertical axis and unemployment … Continue reading »

US / It is a Long-Term Unemployment Crisis

The rate of short-term unemployment—six months or less—is almost back to normal. In January it was 4.9 percent of the labor force. That’s only 0.7 percentage point above its 2001-07 average. But the rate of long-term unemployment, 3 percent in January, is precisely triple its 2001-07 average, according to a Bloomberg Businessweek calculation based on Bureau of Labor … Continue reading »

It’s not a skill mismatch: Disaggregate evidence on the US unemployment-vacancy relationship

US unemployment seems stuck at an unusually high level of 8%, prompting some to suggest a widespread skills mismatch. This column argues that a skills mismatch is not supported by the evidence. Rather, out of the possible explanations, it seems that any shift in the ratio between unemployment and vacancies is driven by either lower … Continue reading »

Evidences suggests that structural unemployment is worsening in many countries

Since the onset of the Great Recession, there has been a change in the relationship between the unemployment rate and vacancy rate in the U.S.” write Bart Hobijn and Aysegul Sahin in Beveridge Curve Shifts across Countries since the Great Recession on frbsf.org. (Choosen excerpts by JMM to follow) This relationship, summarized by the Beveridgecurve, was remarkably … Continue reading»

“We develop a framework where mismatch between vacancies and job seekers across sectors translates into higher unemployment by lowering the aggregate job-finding rate” write Aysegul Sahin, Joseph Song, Giorgio Topa, and Giovanni L. Violante in Mismatch Unemployment on newyorkfed.org. How much did mismatch contribute to the dynamics of U.S. unemployment around the Great Recession? To address this question, we … Continue reading »

4 thoughts on “US / Job openings and unemployment are both worsening”