“Around the world, governments and businesses face a conundrum: high levels of youth unemployment and a shortage of job seekers with critical skills” writes Mona Mourshed, Diana Farrell, and Dominic Barton in a McKinsey in Its report Education to Employment Designing a system that works. (Adapted choosen excerpts by Job Market Monitor to follow)

How can a country successfully move its young people from education to employment? What are the challenges? Which interventions work? How can these be scaled up? These are the crucial questions.

The autors attempt to answer them. To do so, they developed two unique fact bases. The first is an analysis of more than 100 education-to-employment initiatives from 25 countries, selected on the basis of their innovation and effectiveness. The second is a survey of youth, education providers, and employers in nine countries that are diverse in geography and socioeconomic context: Brazil, Germany, India, Mexico, Morocco, Saudi Arabia, Turkey, the United Kingdom, and the United States.

They started the research recognizing the twin crises of a shortage of jobs and a shortage of skills. In the course of it, though, they realized they needed to take into account another key shortage: the lack of hard data. This deficiency makes it difficult to even begin to understand which skills are required for employment, what practices are the most promising in training youth to become productive citizens and employees, and how to identify the programs that do this best.

To put it another way, they have fundamentally different understandings of the same situation. Fewer than half of youth and employers, for example, believe that new graduates are adequately prepared for entry-level positions. 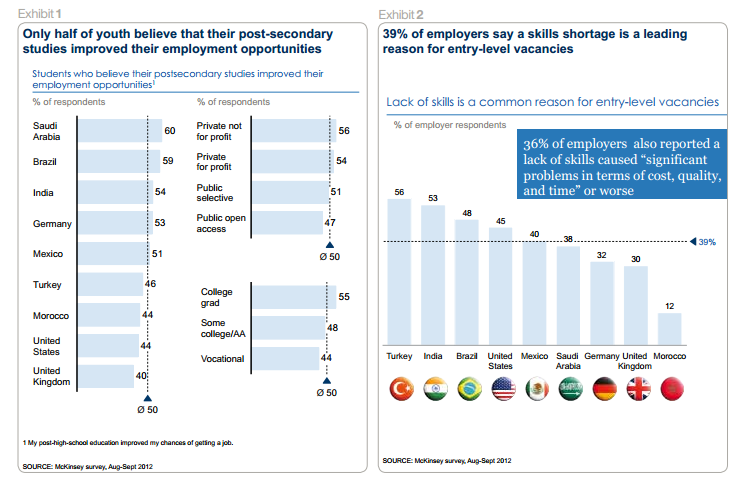 Education providers, however, are much more optimistic: 72 percent of them believe new graduates are ready to work (Exhibit 3).

The same disconnect occurs with regard to education; 39 percent of education providers believe the main reason students drop out is that the course of study is too difficult, but only 9 percent of youth say this is the case (they are more apt to blame affordability).

Why are the three major stakeholders not seeing the same thing? In large part, this is because they are not engaged with each other. One-third of employers say they never communicate with education providers; of those that do, fewer than half say it proved effective. Meanwhile, more than a third of education providers report that they are unable to estimate the job-placement rates of their graduates. Of those who say they can, 20 percent overestimated this rate compared with what was reported by youth themselves. Nor are youth any better informed: fewer than half say that when they chose what to study they had a good understanding of which disciplines lead to professions with job openings and good wage levels.

2. The education-to-employment journey is fraught with obstacles.

In building our fact base,  began to think of the education-to-employment system as a highway with three critical intersections: (1) enrolling in postsecondary education, (2) building skills, and (3) finding a job. There are significant challenges at each intersection.

At the first (enrollment), cost is the top barrier, with 31 percent of high-school graduates indicating they did not continue their education because it was too expensive. Among those who do enroll, 46 percent are convinced they made the right choice in their selection of institution or field of study.

At the second intersection (building skills), about 60 percent of youth say that on-the-job training and hands-on learning are the most effective instructional techniques, but fewer than half of that percentage are enrolled in curricula that prioritize those techniques.

At the third intersection (finding a job), a quarter of youth do not make a smooth transition to work; their first jobs are unrelated to their field of study and they want to change positions quickly. In emerging markets, this number rose to as much as 40 percent.

3. The education-to-employment system fails for most employers and young people.

Examples of positive outcomes in education to employment are the exception rather than the rule. Based on our survey data, we identified three distinct groups of employers. Only one of them, accounting for less than a third of the cohort (31 percent), is successful in getting the talent it requires. What distinguishes these employers is that they reach out regularly to education providers and youth, offering them time, skills, and money. Of the two other segments, the first is minimally engaged (44 percent) and struggling the most to find the right workers, while the second (25 percent) is somewhat engaged but largely ineffectual.

As for young people, the system is not working for most of them, either. McKinsey asked youth a combination of attitudinal and behavioral questions to understand how they thought. On the basis of their answers, as well as their current employment status, we divided them into seven segments—five for those with postsecondary education and two for those without (Exhibit 4). Only two of the seven segments have a positive experience in the job market.

4. Innovative and effective programs around the world have important elements in common.

Two features stand out among all the successful programs reviewed. First, education providers and employers actively step into one another’s worlds. Employers might help to design curricula and offer their employees as faculty, for example, while education providers may have students spend half their time on a job site and secure them hiring guarantees.

Second, in the best programs, employers and education providers work with their students early and intensely. Instead of three distinct intersections occurring in a linear sequence (enrollment leads to skills, which lead to a job), the education-to-employment journey is treated as a continuum in which employers commit to hire youth before they are enrolled in a program to build their skills. The problem, then, is not that success is impossible or unknowable—it is that it is scattered and small
scale compared with the need.

To increase the rate of success, the education-to-employment system needs to operate differently, in three important ways.

Second, the most transformative solutions are those that involve multiple providers and employers working within a particular industry or function.

Finally, countries need system integrators (one or several) responsible for taking a high-level view of the entire heterogeneous and fragmented education-to-employment system. The role of the system integrator is to work with education providers and employers to develop skill solutions, gather data, and identify and disseminate positive examples. Such integrators can be defined by sector, region, or target population.

6. Education-to-employment solutions need to scale up.

There are three challenges to achieving scale:

There are solutions for each.

Report Education to Employment Designing a system that works @ 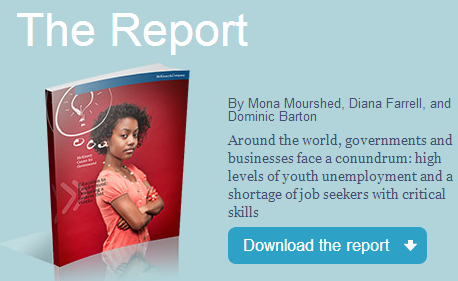 Youth Transitions / A function of how economic, education and employment policies interact

“Youth unemployment was rising since well before the current economic downturn, but the fallout from the financial crisis has brought it to the top of the government’s agenda and generated a plethora of publications and initiatives to tackle the problem.” write Tess Lanning and Katerina Rudiger in Youth unemployment in Europe: lessons for the UK (Adapted choosen excerpts by …Continue reading »

Youth unemployment is rising steadily in the EU as the economic crisis in Europe deepens. The latest data reveals an EU-wide youth unemployment rate of 22.8 percent, up from 21.7 percent a year ago as those under 25 continue to lose their jobs to the economic slowdown… Click here to see each country’s unemployment stats … Continue reading »

“In this economic climate, with such high rates of graduate unemployment, should school leavers give far greater consideration to vocational qualifications?” asks Jane Scott Paul in Are vocational qualifications a better option than university? on guardian.co.uk. “Sadly though, youth unemployment is hardly limited to unqualified school leavers: it now extends to many of Britain’s brightest … Continue reading »

“Young graduates and early school leavers entering the labour market are a population at risk. They are exposed to above-average turnover rates between different jobs and face an increased risk of unemployment. “ write Marc Piopiunik and Paul Ryan in Improving the transition between education/training and the labour market: What can we learn from various … Continue reading »

The last crisis has merely amplified what is an increasingly problematic structural issue in France: Youth unemployment. In the last 30 years, the youth unemployment rate has never dropped below 15% and has regularly exceeded 20%. Yet, integrating young people into the labour market has been an ongoing public policy objective since the end of … Continue reading »

Youth Unemployment in EU – The crisis has caused a significant increase, but rates vary widely

“There are many reasons for youth unemployment: besides the general situation on the labour market, one might mention education and training systems, labour market and employment policies, but also the stratification and distribution of opportunities in society” write  JOERG BERGSTERMANN AND BJOERN HACKER in  Youth Unemployment in Europe on social-europe.eu. As things stand at the moment, the … Continue reading »

By comparison to other European countries, youth unemployment in UK is just below average at around 22%, but it is rising and has been rising since 2005. This suggests structural causes beyond the current economic situation: The labour market has been changing in ways that impact negatively on young people Recruitment practices make it increasingly … Continue reading »

Participants at a dialogue stressed the need for promotion of Technical and Vocational Education Training (TVET) to secure the future of youth and enable Pakistan to take advantage of its growing youth population. This was the crux of a day-long session entitled ‘Dialogue on Skill Development’ political priority for developing the future generation, jointly organized … Continue reading »

India, one of the youngest countries in the world, where youth accounted for 20% of the total population in 2011, according to the Registrar General of India. More importantly, the dependency ratio – the number of children and elderly people per working-age person — declined 21% over the last three decades. In China, the ratio … Continue reading »

The Government of Senegal hosted the West Africa Regional Conference on Youth Employment on Saturday, November 10 in Dakar. The one-day conference, co-organized by the African Development Bank and the OECD Development Centre, brought together West African Ministers, youth organizations, civil society and the private sector. The conference received the special attendance of H.E. Olusegun … Continue reading »

The gap between what young people are taught and what potential employers require is fuelling regional youth unemployment. About 20 per cent of the most educated in the UAE population have no jobs, and in some countries such as Saudi Arabia the figure is double that. “When we talk about the readiness of graduates for … Continue reading »

Gulf oil producers have one of the lowest joblessness rates in the world but unemployment among nationals, mainly the youth, remain a problem because of their heavy reliance on expatriates, according to Saudi bank study. Unemployment among native citizens in the six-nation Gulf Cooperation Council (GCC), the richest in the Arab world, has remained far … Continue reading »

22 thoughts on “The Grand Disconnect – Employers, education providers, and youth”