EU member states should guarantee that young Europeans do not remain out of work or education for more than four months, according to a scheme unveiled Wednesday by the European Commission.

However the cost of tackling youth unemployment would largely fall to the states, said EU Employment Commissioner Laszlo Andor, adding that “the costs of not doing so would be catastrophic.”

The commission has offered to provide money from the European Social Fund, which focuses on employment projects, to support aspects of the scheme.

Around 5.5 million young European jobseekers – more than one in five – cannot find work, Andor said, adding that the figure in crisis-struck Greece and Spain was one in two.

A total of 7.5 million aged 15-24 were not in employment, education or training, he added.

“It is clear that the eurozone crisis is driving up unemployment and the young generation is the worst hit,” Andor said. “The situation is clearly unacceptable and we must take action.”

The commission proposed the introduction a youth guarantee, modelled on a system in Austria and Finland, to be “activated for young people within four months of leaving formal education or becoming unemployed.”

Choosen excerpts by Job Market Monitor from the Report

In light of the impact of the recent negative developments in the labour market on young people, EU Member States have in recent years been actively engaged in designing and implementing policy measures targeted at young people. In the context of its 2011 work programme, Eurofound carried out an evaluation of the effectiveness of selected policy measures introduced by Member States to improve the employability of young people. The full results of this study will be published later in 2012. This short document summarises the strengths and weaknesses of youth guarantee schemes identified in the research. Given that Scandinavian countries are pioneers of this type of policy, this paper focuses in particular on youth guarantee initiatives which have been introduced in Finland and Sweden.

Characteristics of the Finnish and Swedish youth guarantee schemes As pioneers in the activation approach to labour market policies, the Nordic countries have attempted to implement socalled ‘youth guarantee’ schemes for many years. In 1984, Sweden introduced the first genuine youth guarantee, followed by Norway in 1993 and Denmark and Finland in 1996. As some difficulties were encountered in the implementation of these schemes and in maintaining them through the recession of the early 1990s, these measures have been periodically revised during the last decade. In 2007, a new job guarantee scheme for young people was introduced in Sweden while the current Finnish youth guarantee scheme was introduced in 2005 and revised in 2010, with a new revision due in 2013.

While these two measures are obviously not identical, they share the same aim and target group: to reduce the time young people spend in unemployment and inactivity. In the implementation of the scheme, a central role is played by the public employment services (PES). They first provide the young job seeker with a personalised needs assessment and an employment plan, followed by the guarantee. This can be either the offer of a job or a study opportunity (academic or vocational), or some other activation measure. This personalised approach recognises the need for the public employment services to focus on a tailored service, given that there are different reasons behind the difficulties young people face in making the transition from school to work. 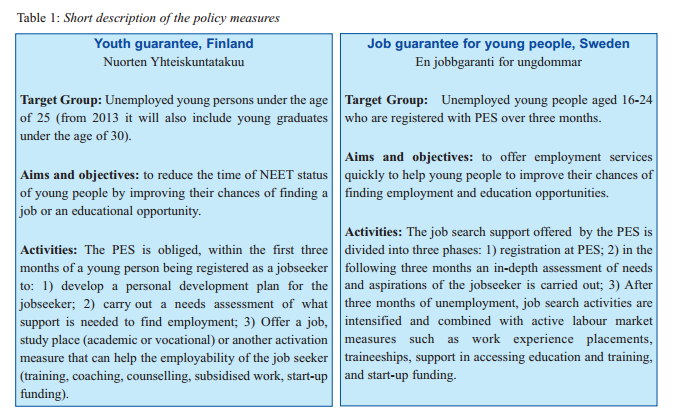 Like Loading...
« The Grand Disconnect – Employers, education providers, and youth
Fiscal Cliff / UI Benefits will end for 3 M: A Brief Overview of the Legislative Procedures for Adjusting the Public Debt Limit »