Job Gap is extending and has entered a new, more structural phase as austerity prevails says ILO who calls for a Global Job Pact

The World of Work Report 2012 provides a comprehensive analysis of recent labour market and social trends, assesses risks of social unrest and presents employment projections for the next five years. The report emphasizes that while employment has begun to recover slowly, job quality is deteriorating and there is a growing sense of unfairness. Moreover, given the pressure on governments to rein in expenditure, policy efforts have focused on structural reforms to boost employment creation. However, if policy instruments are not carefully designed, they could exacerbate the employment situation and aggravate further equity concerns, with potentially long-lasting adverse consequences for both the economy and society.

The report addresses the following questions:

• To what extent has the slow recovery aggravated social conditions, including falling incomes, deepening poverty and worsening inequality?

• Have countries gone too far, too fast with fiscal consolidation? How should they support recovery while meeting fiscal goals in the medium term?

• What can be expected from recent labour market reforms?

• How can investment be boosted so as to ensure a long-lasting recovery in both the economy and jobs?

• What have been the barriers to implementing a more job-centred and equity-enhancing policy approach? Why has the business-as-usual scenario maintained its centrality despite the increasing risk of social unrest?

This report calls for a carefully designed policy approach that takes into consideration the urgent need to create quality jobs while at the same time laying the ground for a more productive, fairer economy and labour market.

How to move out of the austerity trap?

This is the question asks by Raymond Torres, Director International Institute for Labour Studies in its introductory editorial.

The employment situation is deteriorating in Europe and is no longer improving in many other countries. 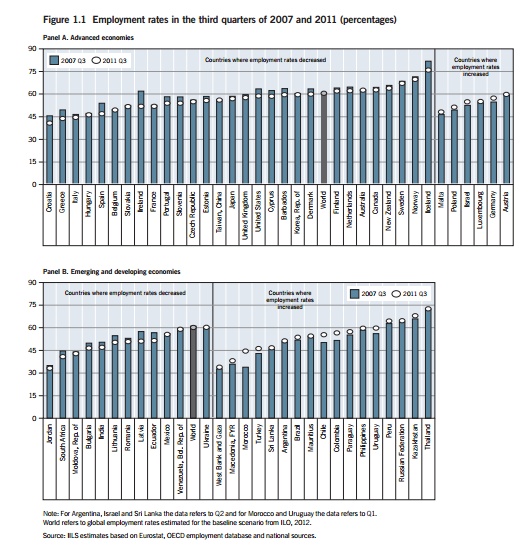 As a result, the global jobs crisis has entered a new, more structural phase. 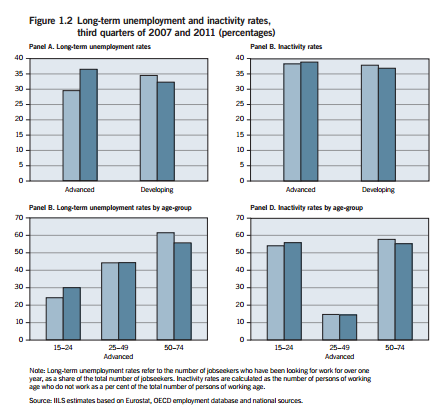 The worsening situation reflects the austerity trap in advanced economies, primarily in Europe and is spreading to other countries.

Futhermore, the short-term employment outlook continues to deteriorate in advanced economies and improves in emerging and developing economies, though unevenly. 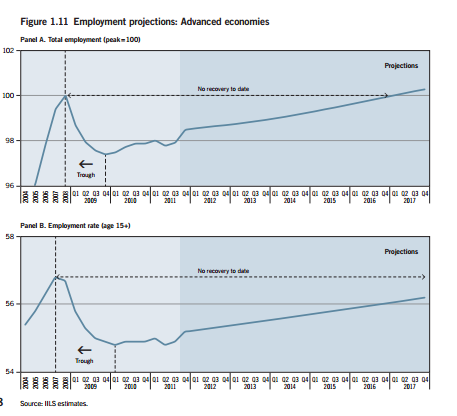 The labour markets in most economies have not recovered from the global crisis. Moreover, the major economic slowdown is further affecting the labour market recovery. Further, the recovery in the labour market has largely been of a precarious kind, with increase in temporary, involuntary part-time and temporary employment and informal employment. The crisis has also led to an increase in poverty rates and inequality in half of advanced economies and one-third of developing economies. These trends could further lead to reduced social cohesion.

An alternative approach exists which requires embracing the perception that job-friendly policies have a positive effect on the economy and that the voice of finance should not drive policy-making.

The current policy approach reflects the premise that growth follows austerity and that, in turn, jobs follow growth. According to this view, the main thrust of efforts to date has therefore focused on cutting deficits and restoring global growth to positive territory with the view that, soon thereafter, job creation would follow. As a consequence, more direct efforts to stimulate job creation and boost the incomes of those most vulnerable to the crisis have been of secondary importance.

Since there are now indications that these premises have proved counterproductive, it is vital to demonstrate that an alternative, job-centred approach outlined above exists. It is also imperative to nurture this alternative approach with concrete examples of policies that work, in which ILO has played a key role via the adoption of the Global Jobs Pact and could play a greater role as a forum for policy analysis. 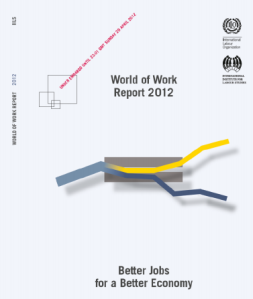 World of Work Report 2012 “Better Jobs for a Better Economy”.

Like Loading...
« Canada | Fed Budget | A Third Wave coming while 4,000 to 6,000 to receive notices at StatCan and HRDC
Spain enters in recession helped by austerity »