High levels of inequality accompanied by changes in technology, employment relations, and the global division of labor haveraised significant concerns regarding the future of work.  The most extreme scenarios argue that explosive growth in thepower and scope of artificial intelligence (AI) and automation imply fundamental occupational change and possible massunemployment in the near- or medium-term (Frey and Osborn 2017).  Even those who do not believe technological changewill be so rapid or sweeping are concerned that job skill requirements are increasing so quickly or poised to do so that many people are at risk of being shut out of the workforce.  The prospect of unusually rapid skill-biased technological change(SBTC) in the future has generated such interest that research is no longer confined to academics and policy analysts, asvarious consulting and business-related think tanks regularly weigh in with reports on the implications of artificial intelligencefor work in the future.  The subject is now a staple of media coverage, public polling, and popular conversation, as well asacademic research.

In fact, this is the most recent iteration of a longstanding concern regarding the pace of change  in skill demand that begannearly forty years ago when the emerging technology was microcomputers, whose introduction coincided with a deeprecession, growing wage inequality, and concerns over educational quality.  An earlier wave of concern in the late 1950s-early 1960s coincided with the introduction of mainframe computers, electronic data processing, factory automation, and the launchof Sputnik, and framed the discussion in often surprisingly similar terms, including fears of mass unemployment especiallyamong the less-skilled.  A presidential commission on automation chaired by economist Robert Solow concluded in its reportissued in 1965 concluding that slow economic growth had a far a more powerful influence on the unemployment rate thantechnological change.  However, concern over automation was already receding by the time the report appeared, as robusteconomic growth resumed.  A few years later the acceleration of growth in the late 1960s brought the rise in employmentpredicted by the report, which effectively ended that wave of the debate over technological unemployment (Handel 2003b, p.6).  An evenearlier wave of concern with joblessness during the late 1920s and into the Great Depression, prompted by new technology,mass production, and unprecedented productivity growth, also ended with the recovery of the macroeconomy.2   None of thesecases are proof that current concerns are ill-founded, but they do provide perspective and cautionary lessons.

The past ten years are notable because yet again there was a combination of significant technological advance and poormacroeconomic conditions, in this case caused by the most severe financial crisis since the Great Depression.  Again, someeconomists argued that subsequent weak employment growth reflected rising structural unemployment, as job skillrequirements raced ahead of worker capacities.  This skills mismatch view was dispelled in favor of cyclical explanationsafter research identified weak economic growth as the culprit, as in the past (Lazear and Spletzer 2012; Rothstein 2012, 2017;Levine 2013; Abraham 2015; Cappelli 2015).  Indeed, as the economy continued to grow, albeit slowly, total employmentincreased to more than 152 million workers in November 2019, surpassing its pre-recession peak of 138 million (2007) by more than10%.3   The employment-to-population ratio for workers age 25-54 also reached 80.3% in November 2019, matching thebrief pre-recession maximum in January 2007 and exceeding all previous values since 1948 except for five years during thelate 1990s boom (July 1996-July 2001).4   Instead of mass unemployment, there are more jobs today than ever.  Likewise,slower productivity growth in the past ten years is at odds with the dominant narrative regarding the rapidity of recenttechnological change.5   In short, history and recent experience indicate a common tendency to overestimate the implicationsof new technologies and to overinterpret cyclical movements as secular trends, which current views of the future may riskrepeating.

The record of aggregate job growth raises the question of whether there is cause for concern regarding the kinds of jobs thatare being created and may be available in the future.  With respect to job skill demands, while the future is unknowable in aliteral sense, empirical research on levels and changes in job skill requirements offers some perspective, including basicinformation on magnitudes.  It is commonly believed that the demand for skills at work has recently been growing much morerapidly than in the past or soon will be, and that the rapid diffusion of information and communication technologies (ICT) is amajor reason for accelerating change in the nature of work (e.g., Hassett and Strain 2016).  However, the available evidencetells a more complicated story.

Job skill requirements are numerous and varied, and measurement of their levels remains unstandardized, so there issignificant room for alternative approaches to understanding skill change.  While the direction of trends has been a focus ofresearch, there is much less understanding of the rate and magnitude of the changes and their timing.  The notion that ICT has led to an acceleration in the rate of change is much discussed but also has received little systematic investigation.6   Infact, the research literature contains no discussion or consideration of what would count as rapid or gradual skill change.  Theclaim that change has been accelerating in response to the ICT revolution since 1980 can only be evaluated with respect tolong historical time series, which can also offer some guidance regarding the plausibility of the idea that the economy is poised for an even sharper acceleration with the maturation of AI applications.

The first section of this paper discusses conceptual and data issues.  The second section describes current levels of job skill requirements, for which recent data is particularly rich.  The third section presents evidence on overall trends in job skillrequirements, mostly from other advanced economies, and evidence on trends related to changes in the occupationalcomposition of the workforce, mostly from the United States.  A final section concludes.  In this paper, existing evidence is examined to provide an understanding of historical trends and current levels, and a frame of reference for evaluating predictions regarding future changes in job skill requirements…

It is reasonable to conclude that cognitive and interpersonal skill requirements have grown over time and physical job demands have declined. However, rates of change over several decades have also been quite gradual in general and often quite variable, with fluctuations, reversals, and flat periods whose explanations are not immediately obvious…

Change has been progressive as well as gradual, such that the nature of work today differs greatly from that prevailing in 1950 or 1960. However, what is notable is the relative continuity between adjacent decades. Forecasts of extremely rapid change in the next twenty years are not based on anything visible in the empirical record. It is difficult to detect consistent acceleration in skill requirements resulting from the computer revolution beginning in 1980. Even the previous decline of agricultural jobs, which was faster than the more recent decline of blue-collar jobs, provides no precedent for change on the scale currently predicted. Computer technology changes very rapidly, but it is not obvious that work roles change at remotely comparable rates. The functions relating technology to skills and employment remain elusive, but it is clear that if technological change is best described by Moore’s Law then the transmission of IT’s effects to the workplace is governed by some kind of dampening function. Computer technology changes rapidly but any belief that changes in the workplace mirror those rates is fallacious. Chip density and microprocessor speed may grow exponentially, job requirements change gradually.

At the same time, the direction of change toward more skilled work is clear, and upper white-collar occupations now represent a large plurality of jobs. Less skilled work has always been les rewarded, and occupations and industries that are declining have been subject to even greater pressures, as political events across many advanced economies remind us. The focus on future worst-case scenarios is in some sense a distraction from current problems and possible remedies. For example, increasing the supply of workforce skills at middle and lower levels may increase demand for them and their use in production, which might translate into greater economic rewards. However, understanding any change in job skill requirements will require better data in the future in the form of objective and standard survey measures administered consistently over a long time frame. 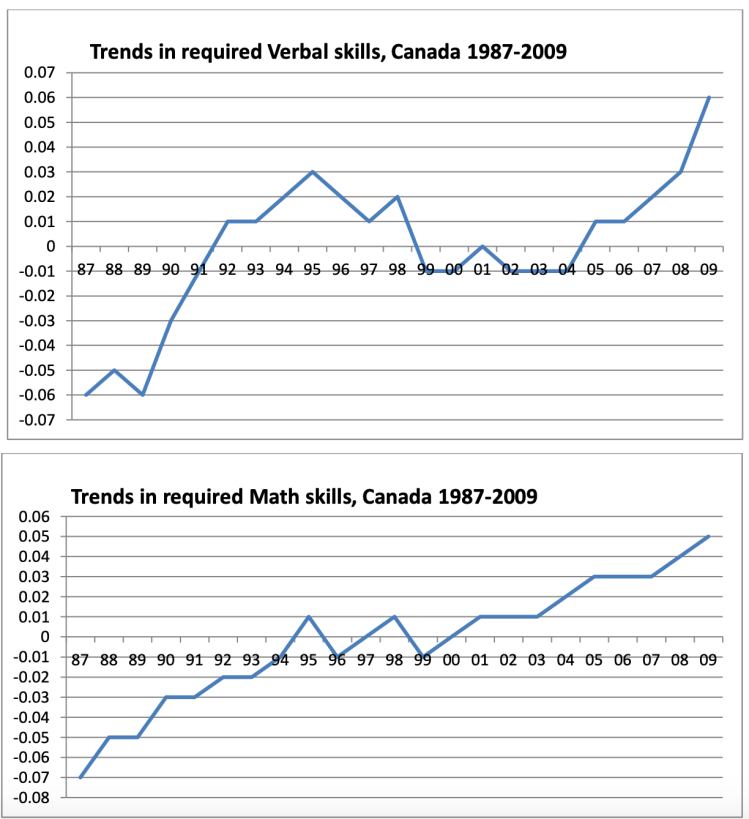 Like Loading...
« Covid and Immigration in Australia – How have previous recessions affected migration
UI Weekly Claims in US (Week ending September 12) – 860,000, a decrease of 33,000 from the previous week’s revised level »