Western countries have the highest levels of educational attainment in the world. Many individuals, however, do not have a high school diploma and consequently do not have any certification from the school system. For example, among Canadians aged 25 and over in 2016, 14% reported that their highest level of education was “less than high school graduation.” In the United States, the corresponding proportion was 12% in 2015.

Research focusing on the reasons for dropping out of high school has identified a number of related factors, which can be grouped into several major categories: family-related; peer; school-related; individual; and economic. Family-related factors include low educational and occupational attainment levels of parents, low family income, and single parenthood. Poor academic achievement and poor quality schools are some of the school-related factors. Individual characteristics such as low self-esteem, low aspirations and teenage pregnancy are also related to dropping out of school. Lastly, if students with low cognitive skills expects that their wages might be similar whether they graduate from high school or not, their chances of finishing high school are lower.

Research in the U.S. has shown that not completing high school not only has individual consequences but also economic and social ones. Individual consequences include low levels of academic skills and an absence of educational credentials, which translate into unfavourable labour market outcomes. Economic and social outcomes include forgone national income and tax revenues, increased demand for social services, increased crime, reduced social participation, reduced intergenerational mobility and poorer levels of health.

This article adds to the Canadian literature by examining the characteristics most likely to be associated with having less than a high school diploma. It then examines the extent to which the labour market and income characteristics of those individuals differ from those with higher levels of education among both men and women. 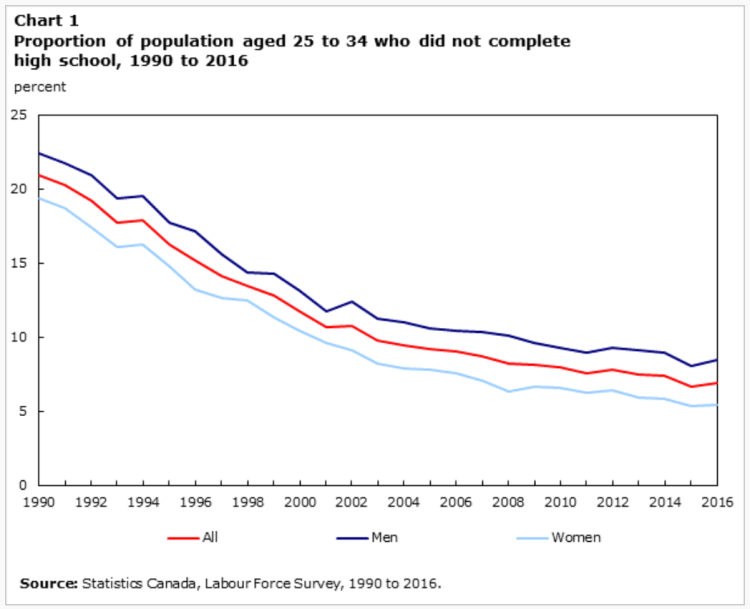 In this paper, multiple sources of data are used to study the profile and labour market outcomes of young men and women aged 25 to 34 without a high school diploma. The data sources include the Labour Force Survey (LFS), the Canadian Income Survey (CIS) and the Canadian Survey on Disability (CSD).

Chosen excerpts by Job Market Monitor. Read the whole story at Young men and women without a high school diploma

Like Loading...
« Gender Differences in Occupations in US – Risk aversion and attitudes toward competition, a clear scope for future
Immigration in US – About one-fifth of the world’s migrants »