In 2014, 1.8 million temporary migrant workers left the Philippines to work in more than 190 countries, each one bearing an employment contract issued and certified by the Government of the Philippines. From factory and domestic workers to engineers and nurses, Filipinos occupy a wide range of jobs abroad. Legal movements of temporary workers on this scale are unparalleled elsewhere in the developing world. Those who leave to work overseas join a huge Filipino diaspora, estimated by the Commission on Filipinos Overseas (CFO) at approximately 10.2 million people at the end of 2013, making it one of the largest emigrant populations in the world. Nearly half of the Filipinos abroad are legal temporary workers. 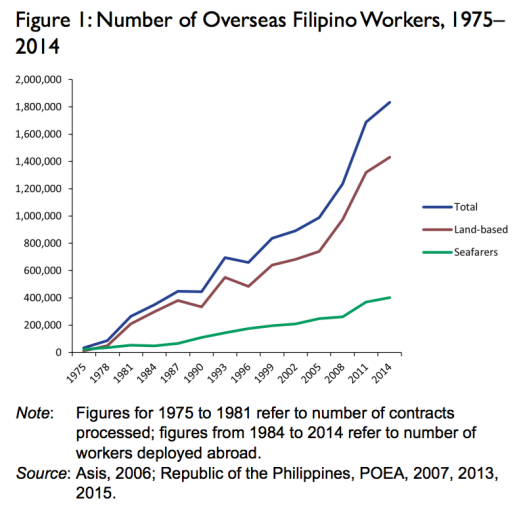 While Filipino migrant workers contribute significantly to the national economy with the remittances they send home (over USD 27 billion in 2014, according to the Philippine Central Bank), this reliance on exporting labor raises an important question: Has the nation’s focus on preparing workers to leave compromised human capital development at home?

Focusing on sending workers overseas may result not only in the physical loss of talent—popularly known as brain drain—but also in mismatches between jobs and skills, as educational and training institutions align themselves with the needs of the international labor market rather than of local ones. Even as the Philippines sends a robust supply of workers abroad, it suffers labor shortages in key industries, such as science, technology, engineering, mathematics (STEM), medicine, and aviation. On the other hand, there is broad agreement that remittances have improved access to education and reduced child labor in families that receive these funds. The effects may be even broader: the existence of opportunities overseas can inspire a greater number of people to gain additional skills and qualifications than the number who will eventually leave.

Chosen excerpts by Job Market Monitor. Read the whole story at Shortage Amid Surplus: Emigration and Human Capital Development in the Philippines | migrationpolicy.org

Like Loading...
« Occupational Outlook in US – The fastest growing occupations
The Skills Gap, Higher Education and the Workplace Readiness – The broken link »