By 2018 the global youth unemployment rate is projected to rise to 12.8 per cent, with growing regional disparities, as expected improvements in advanced economies will be offset by increases in youth unemployment in other regions, mainly in Asia. 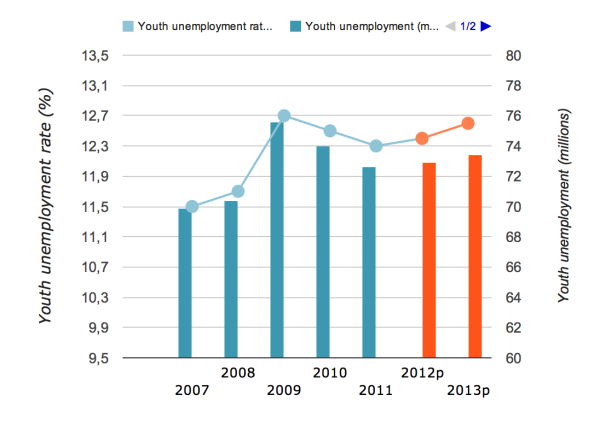 ‘It is not easy to be young in the labour market today‘ writes the International Labour Organization (ILO) in its report GLOBAL EMPLOYMENT TRENDS FOR YOUTH 2013 A generation at risk*.

The weakening of the global recovery in 2012 and 2013 has further aggravated the youth jobs crisis and the queues for available jobs have become longer and longer for some unfortunate young jobseekers. So long, in fact, that many youth are giving up on the job search. The prolonged jobs crisis also forces the current generation of youth to be less selective about the type of job they are prepared to accept, a tendency that was already evident before the crisis. Increasing numbers of youth are now turning to available part‐time jobs or find themselves stuck in temporary employment. Secure jobs, which were once the norm for previous generations – at least in the advanced economies – have become less easily accessible for today’s youth.

The global youth unemployment rate, estimated at 12.6 per cent in 2013, is close to its crisis peak. 73 million young people are estimated to be unemployed in 2013.1 At the same time, informal employment among young people remains pervasive and transitions to decent work are slow and difficult.

Skills mismatch is adding to the youth employment crisis.

Skills mismatch on youth labour markets has become a persistent and growing trend. Overeducation and over‐skilling coexist with undereducation and under‐skilling, and increasingly with skills obsolescence brought about by long‐term unemployment.

Such a mismatch makes solutions to the youth employment crisis more difficult to find and more time consuming to implement. Moreover, to the extent that young people in employment are actually overqualified for the job they are doing, society is losing their valuable skills and forfeiting stronger productivity growth that would have been achieved had these young people been employed at their appropriate level of qualification.

This report examines two types of skills mismatch, using levels of educational attainment as a proxy for skills. The first type consists of mismatch between the supply and demand of skills, and is based on a comparison of the educational attainments of the employed and the unemployed. The second type concerns mismatch between the skills that young people possess and those required by their jobs.

In advanced economies, the evidence shows there is a higher risk of mismatch for those at the bottom of the educational pyramid, which is reflected in relatively high unemployment rates for the low‐skilled in comparison with the high‐skilled. This type of mismatch increased from 2010 to 2011, signalling a deterioration of the labour market position of low‐skilled youth. 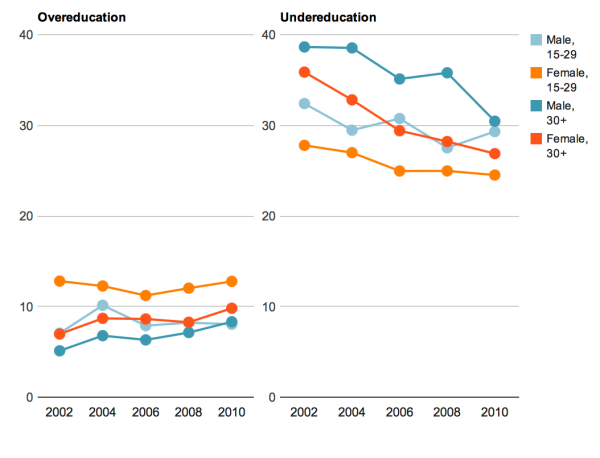 With respect to the second type of mismatch, the evidence from advanced economies shows that young people (aged 15–29) are far more exposed to overeducation than workers aged 30 and above, and are also less likely to be undereducated. Overeducation of youth in advanced economies increased by 1.5 percentage points in the period 2002 to 2010, reflecting in part increases in educational attainment. However, the strong increase in overeducation in the past two years (by 1.4 percentage points) suggests another consequence of the economic crisis: youth with higher levels of education are increasingly taking up jobs that they are overqualified to do. The growing phenomenon of overeducation therefore implies a crowding out of youth at the bottom of the educational pyramid. The less‐educated youth find themselves at the back of the queue even for those jobs for which they are best qualified. Apart from youth, labour market groups that often face an elevated mismatch risk include women, the disabled and migrants. 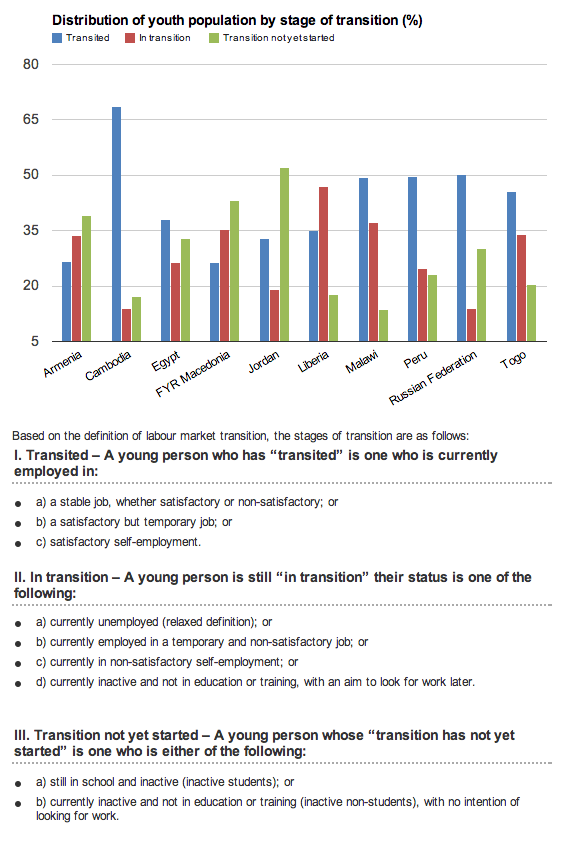 In developing regions where 90 per cent of the global youth population lives, stable, quality employment is especially lacking.

Developing regions face major challenges regarding the quality of available work for young people. This report confirms that in developing economies where labour market institutions, including social protection, are weak, large numbers of young people continue to face a future of irregular employment and informality. Young workers often receive below average wages and are engaged in work for which they are either overqualified or underqualified. As much as two‐thirds of the young population is

underutilized in some developing economies, meaning they are unemployed, in irregular employment, most likely in the informal sector, or neither in the labour force nor in education or training.

via Global Employment Trends for Youth 2013.

Like Loading...
« Canada’s New ‘Census’ / One in five of the total population identified themselves as a member of visible minorities
Germany / Low Wage Workers Dependent on Welfare Benefits »