There have been only two administrations that turned in a worse performance in private-sector job growth says NYTimes.com

The December jobs figures out today indicate that there were 725,000 more jobs in the private sector than at the end of 2008 — and 697,000 fewer government jobs. That works into a private-sector gain of 0.6 percent, and a government sector decline of 3.1 percent.

How does that compare? …

Going back to Dwight Eisenhower, there have been only two administrations that turned in a worse performance in private-sector job growth. 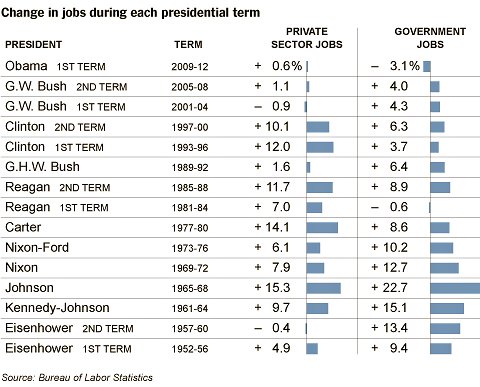 US / An increase of only 28,000 persons saying they have a job: proportion at work declined

The last Employment Report for 2012 is fresh out. Comments will focus on the fact that Nonfarm payroll employment rose by 155,000 and the unemployment rate was unchanged at 7.8 percent. All that is true but… there is a big bad news. An important indicator coming from the household survey is the Employment-population ratio which , in short, … Continue reading »

Where The Jobs Are: ZeroHedge on The Jobs Gerontocracy

Tyler Durden of ZeroHedge writes: A good jobs report? Sure, if one is 55 and over. In December the American jobs gerontocracy continued its relentless course … some 2.7 million jobs in the 16-55 year old category have been lost. The “offset”: 4 million jobs for Americans between 55 and 69. For all those young people … Continue reading »

Like Loading...
« Where The Jobs Are: ZeroHedge on The Jobs Gerontocracy
Canada / Employment rose by 40,000 and the unemployment rate declines the lowest in four years »