OECD – United States: income support would provide much greater value to the unemployed if they were offered in tandem with a more active set of re-employment services

‘Although job creation has improved and the unemployment rate has come down from a high of 10.0% in October 2009, the effects of the recession on the labour market remain‘ writes, unsurprirsingly the OECD in Economic Survey of the United States 2012. (Adapted excerpts by JMM)

Unemployment duration is still extremely high, and about 40% of the unemployed have been out of work for 27 weeks or more. Policies to promote job creation and facilitate the return to work should be taken further, notably by putting more emphasis on labour activation to help the long-term unemployed search for jobs and find adequate training programmes. In the longer term, education and training is the key to raising the skills and wages of the workforce.

Income inequality and relative poverty are among the highest in the OECD. This is associated with a number of negative consequences, including low intergenerational social mobility. High income inequality is attributable to a significant degree to the large dispersion of earned income, which should be addressed by reforming education, so as to provide disadvantaged students with the skills needed to fully realise their potential. To reduce both income inequality and distortions in resource allocation, tax expenditures that disproportionately benefit high earners should be limited over time. In particular, effective tax rates on debt-financed corporate investment and housing should be equalized at the higher rate on equity-financed corporate investment while simultaneously lowering the corporate tax rate. Social transfers could be more effective in alleviating poverty through better targeting of the truly needy and simplifying of transfer programmes…

Moreover, education reform is needed to strengthen achievement and to address lagging tertiary attainment, notably in the fields of science, technology, engineering and mathematics (STEM). 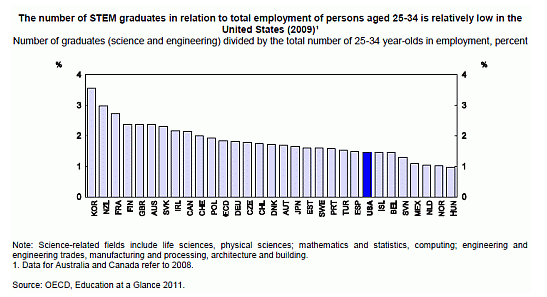 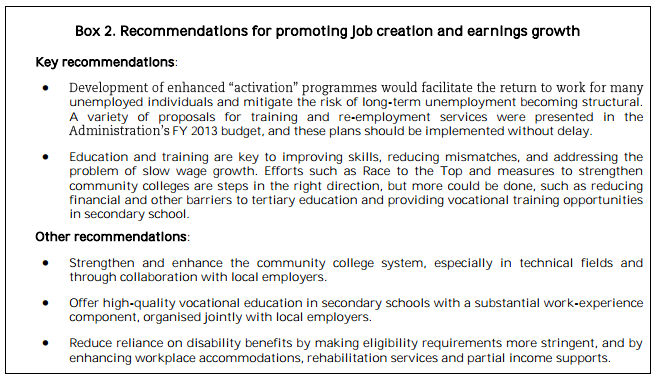 The US labour market was hard hit during the economic downturn

Although the recovery in private-sector job creation thus far has been substantial, OECD estimates indicate that the non-accelerating inflation rate of unemployment (NAIRU) has increased slightly, to around 6%, and that cyclical unemployment is still more than 2% of the labour force. However, structural unemployment may well already have risen more than this estimate would suggest, and there is a risk that it could increase still further given the high levels of long-term unemployment.

Long-term unemployment may be becoming structural

Another development in recent years that is highly unusual for the US labour market is the dramatic rise in long-term unemployment (Figure 8). From 2003 to 2007, prior to the onset of the crisis, the median duration of unemployment reported in the BLS survey of households was about 9 weeks. By early 2010, this figure had risen to almost 26 weeks, although since then it has edged down to around 20 weeks. The increased duration reflects the slow recovery and may also owe, in part, to the lengthened eligibility period for unemployment benefits.

The persistence of high unemployment duration is worrisome because the experience of other OECD countries has been that long-term unemployment can become structural or lead to permanent reductions in labour force participation. 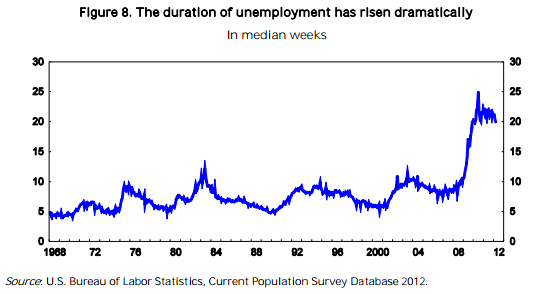 These emergency unemployment benefits have provided a much-needed cushion for many of the most financially-stressed households. The programme is an effective tool for stimulating aggregate demand and boosting economic activity, because benefit recipients are likely to be liquidity-constrained households who have a high propensity to consume. Although there is little evidence that the benefit extension has significantly reduced job search intensity, this could occur if such benefits remain in place long enough. To avoid this outcome, the duration of unemployment benefits should be pared back gradually toward its pre-recession baseline of 26 weeks as the labour market improves.

Furthermore, these passive forms of assistance would provide much greater value to the unemployed if they were offered in tandem with a more active set of re-employment services that can connect job seekers with job opportunities, facilitate job search, and guide individuals towards training and education. Job counsellors should be used to provide active case management, especially to those who appear to be at an elevated risk of becoming structurally unemployed. Evaluation studies show that additional job-search assistance and expanded opportunities for training can also be cost-effective. Relative to other OECD countries, the United States currently spends little on these types of reemployment services (OECD, 2011a), and developing an effective activation system will require significantly more resources.

Some steps have been taken in this regard. The American Recovery and Reinvestment Act of 2009 included additional funds for states to expand the services provided by One-Stop-Career-Centers, and the Middle Class Tax Relief and Job Creation Act of 2012 added a requirement that all Extended Unemployment Compensation (EUC) recipients receive eligibility assessments and re-employment services, including labour market information, skills assessments and a re-employment plan.

Moreover, the Act introduced other innovative measures to move the unemployment compensation system in the direction of becoming a re-employment system, such as allowing the flexible use of unemployment benefits by individuals seeking to launch their own businesses or who are undergoing short-term, on-the-job training. The Administartion 2013 budget proposal included several other measures aimed at investing in a more comprehensive activation system, and these should be implemented in full.

Additional efforts to integrate the existing programmes that provide income support, re-employment services and training are also encouraged, as the current system is very piecemeal. The development of a coherent system for activation services would also help ensure that scarce fiscal resources are directed toward the programmes that will generate the highest return.

Furthermore, labour market participation has edged down despite the increase in employment thus far in the recovery. While part of these declines reflect the fact that ongoing weakness in labour demand has led some individuals to give up their job search, the recent behaviour has also occurred in the context of a longer-term decline in the participation rate, which will present challenges to the government in meeting its long-term fiscal objectives. Demographic factors, especially the ageing of the baby-boom generation, have been putting downward pressure on potential labour supply for more than a decade, and researchers have projected that these effects will continue in the years ahead.

In addition, participation rates for youth have been trending down since the mid-1990s, and this pattern accelerated during the recession. While rising school enrolments can partly explain the declines in labour market participation for youth, other contributing factors are more worrisome, such as the declining concentration of jobs in the middle of the skill distribution, which has led to increased competition from adults for entry-level jobs.

A longer-run concern is the slow growth in labour income for much of the population. Since the early 1980s, real compensation growth has lagged far behind the gains in labour productivity (Figure 9), partly reflecting higher growth in consumer prices than in producer prices. Separately, information on earnings by level of education show that while earnings for college graduates have held steady or increased slightly over this period, earnings for workers with lower educational attainment have declined, with the result that
the college/high school wage premium surged from 35% in 1980 to 60% in 2005.

Like Loading...
« Neet – not in work or education – On the rise in UK
India: Vocational training lost importance has led to the widening gap between supply and demand for skilled manpower across various industries »

8 thoughts on “OECD – United States: income support would provide much greater value to the unemployed if they were offered in tandem with a more active set of re-employment services”