A plurality of the American public believe that young adults are having the toughest time of any age group in today’s economy — and a lopsided majority says it’s more difficult for today’s young adults than it was for their parents’ generation to pay for college, find a job, buy a home or save for the future.

A new Pew Research Center survey also finds that young adults (ages 18 to 34) say that the sluggish economy has had an impact on a wide array of coming-of-age decisions about career, marriage, parenthood and schooling.

These accommodations to a tough economy appear to have contributed to a broader change in social norms about when adulthood begins. The survey finds that today two-thirds of parents of children age 16 or younger say children should have to become financially independent from their parents by the age of 22 — down from 80% who felt this way in 1993.

Nearly half of all young adults say their age group is having the hardest time in today’s economy, but even in the face of their own downbeat assessment, their long-term economic optimism remains notably unshaken by current travails. Nearly nine-in-ten of today’s 18-to-34 year-olds say they earn enough money now to lead the kind of life they want, or that they expect to earn enough in the future. 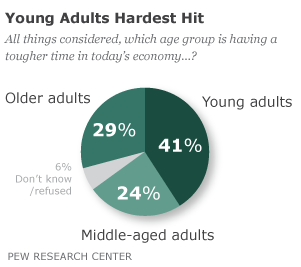