Five years after gradation, earnings vary widely by field of study within credentials, with the top fields earning between 40% and 60% more than graduates from fields with the lowest earnings.

On average, graduates in Architecture, engineering and related technologies earn the most among college-level certificate, college-level diploma and bachelor’s degree students five years after graduation (respectively, $60,500, $64,500 and $80,400). Among master’s and doctoral graduates, those from Business, management and public administration earn the most ($103,800 and $123,600, respectively).

At the other end of the spectrum, graduates in the Humanities with college- level certificates and diplomas and doctoral degrees, and graduates in Visual and performing arts, and communication technologies with bachelor’s and master’s degrees earn the least. These graduates earn between 43% less ($27,500) for college-level diplomas and 61% less ($62,800) for master’s degrees than those from the highest earning fields of study.

The exception to these large differences is among professional degree graduates, for whom only two fields of study are observed:

Social and behavioural sciences, and law and Health and related fields. Graduates from these two fields (primarily doctors and lawyers) earn essentially the same amount five years after graduation.
In every field of study, women earn less than their male counterparts five years after graduating and in the vast majority of cases average gender earnings differences increase from year one to year five .
Across the six credentials, women earn 2% to 21% less than men in their first year following graduation. This difference grows to between 16% (doctoral degree) and 34% (college-level certificate) after five years.

Averaging across all credentials, women earn 12% ($5,700) less than men one year after graduation. This difference widens every subsequent year, in both absolute and relative terms, to 25% ($17,700) five years after graduation.

Gender earnings differences vary by field of study — in some instances substantially — and increase over time in the vast majority of cases. Of our 51 credential and field of study categories, women earn more than men in only three cases in the first year after graduating. By the fifth year, women earn less than men in every case.

For instance, five years after graduating, female college-level certificate and diploma holders in Education earn about 45% ($28,500) less than their male counterparts. For master’s degree holders in Visual and performing arts, and communication technologies, and Business, management
and public administration, women earn 32% less than men ($16,800 and $39,600, respectively). In some fields, however, the differentials are considerably smaller. For bachelor’s degree graduates in Health and related fields, women earn 1.9% ($1,300) less than men.

International students who stay and work in Canada earn less than their Canadian counterparts, but the differences narrow over time .

Across four of the five credentials observed, international students earn between 17% and 38% less than Canadians one year after graduation. However, these differences narrow to between 5% (doctoral degree) and 20% (master’s degree) five years out. Among college-level certificate graduates, international students have similar earnings to Canadian graduates.

Taking graduates at all credential levels together, international students who graduated in 2010 and then stayed and worked in Canada earned 21% ($9,000) less than Canadian graduates one year following graduation.

By field of study, only international students with master’s degrees in Mathematics, computer and information sciences, and Health and related fields earn more than their Canadian counterparts — an additional 7.8% ($5,800) and 6.0% ($4,600) five years after graduating. Two of the largest differences observed are also among master’s degree holders. Master’s graduates in Business, management and public administration, as well as Education, earn 35.5% ($37,800) and 40.0% ($32,400) less than Canadian graduates.

In contrast to the patterns observed by gender, the earnings differences between Canadian and international student graduates tend to narrow over time in relative terms. 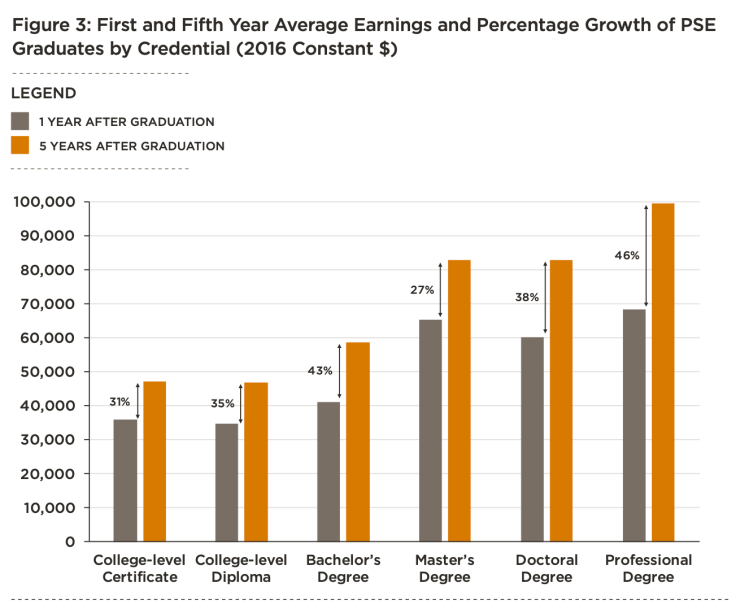 Chosen excerpts by Job Market Monitor. Read the whole story @ How much do they make?: new evidence on the early career earnings of Canadian post-secondary education graduates by credential and field of study

Like Loading...
« Subsidized Employment Programs for Disadvantaged in US – Pattern of results makes it difficult to draw firm conclusions about which type of program works best, and for whom
COVID and TVET Systems – Can play a critical role in the different stages »