COVID and Mortality in Europe – Excess mortality is driven by some countries, primarily seen in the age group of 65 years and above

Pooled estimates from the EuroMOMO network show excess all-cause mortality, overall, for the participating countries; however, this pooled excess mortality is driven by a particularly high excess mortality in some countries, primarily seen in the age group of 65 years and above.

Data from 24 participating countries or regions were included in this week’s pooled analysis of all-cause mortality in Europe.

The number of deaths in the recent weeks should be interpreted with caution as adjustments for delayed registrations may be imprecise. Furthermore, results of pooled analyses may vary depending on countries included in the weekly analyses. Pooled analyses are adjusted for variation between the included countries and for differences in the local delay in reporting. 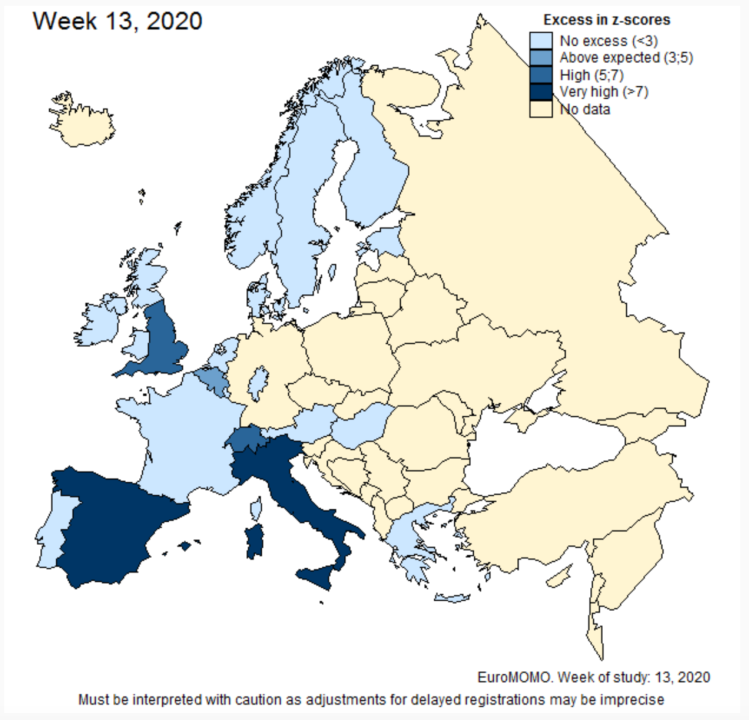 Pooled weekly total number of deaths in the data-providing EuroMOMO partners for the past 4½ years, in four age groups.

Cumulative sum of the weekly deviations from the baseline during the summer-season (from week 20 to week 40) in the data-providing EuroMOMO partners for the past 4½ years, in four age groups.

Note to the reader by JMM :

The thick red line has been added by us to see that, up to date at least COVID has not been so deadly as to change the overall “normally observed” picture in Europe. To follow …

Like Loading...
« COVID in US – Will the Coronavirus Aid, Relief, and Economic Security Act help?
COVID-19 and Restaurants in Canada – Has cost 800,000 jobs since March 1 »