In the News, Report

Governments should urgently reform their pension systems to ensure that the growing share of workers in temporary or part-time employment can contribute enough during their working lives to receive an adequate income in retirement, according to a new OECD report.

“Governments need to quickly put in place more inclusive and harmonised pensions for all,” said OECD Secretary-General Angel Gurría. “Reforming pension policies in OECD countries to reduce gaps between standard and non-standard workers in terms of coverage, contributions and entitlements is essential.”

Non-standard workers usually earn less, often contribute less to earnings-related pensions and cannot contribute to occupational schemes. Even assuming a self-employed worker contributed during a full career, they would end up with around 80% of the pension benefit that dependent employees with similar income would receive from mandatory schemes, on average across the OECD.

Countries should focus on creating more inclusive and harmonised pensions for all, rather than a radical shift in designing and financing pensions. Access to personal pension plans should not discriminate between different types of workers, for example, and people should more easily be able to transfer their pension rights and assets when they change jobs.

The Outlook also warns of the mounting risks that countries will not deliver on recently adopted reforms, despite the acceleration of population ageing in OECD countries.

‌Over the last 40 years the number of people older than 65 years per 100 people of working age (20-64 years) increased from 20 to 31. By 2060, this number will likely have almost doubled to 58. Ageing is expected to be particularly fast in Greece, Korea, Poland, Portugal, the Slovak Republic, Slovenia and Spain, while Japan and Italy will remain among the countries with the oldest populations.

Among the report’s other key findings are that:

People aged over 65 currently receive less than 70% of the economy-wide average disposable income in Estonia and Korea, but slightly more than 100% in Israel, France and Luxembourg. On average in the OECD, over-65s receive 87% of the income of the total population.

The relative poverty rate for those older than 65 is slightly higher than for the population as a whole (13.5% versus 11.8%) for the OECD on average. The old-age poverty rate is below 4% in Denmark, France, Iceland and the Netherlands, while it is above 20% in Australia, Estonia, Korea, Latvia, Lithuania, Mexico and the United States. 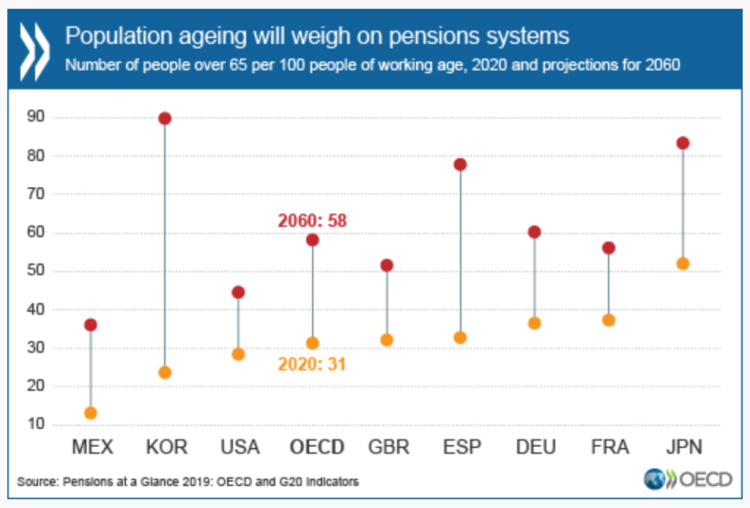