Strong job creation continues, with employment reaching a record level in the EU. In the third quarter of 2018, 239.3 million persons were in employment in the EU, around 15 million more than the lowest level reached in mid-2013, at the peak of the crisis. The employment rate of people aged 20-64 rose to 73.2% in the same period: with the current trend, the EU is well on track to reach the Europe 2020 target of a 75% employment rate in 2020 (and, indeed, eight EU Member States had already reached their national Europe 2020 target in 2017). Employment growth in 2017 and the first three quarters of 2018 was spread among all main demographic groups, with the largest increases recorded by older workers (55-64) as in previous years. Yet, substantial disparities in employment rates across the EU suggest that there is room for further improvement, notably for those Member States that are still far from attaining their national Europe 2020 targets.

Unemployment has returned to its pre-crisis level, but remains high in a number of Member States. Thanks to the steady labour market recovery, the unemployment rate kept declining in 2017, to reach 6.8% in the third quarter of 2018. It now stands at the lowest level in ten years, more than 4 percentage points (pps) below the 2013 peak. In the euro area, the unemployment rate at 8.1% in Q2-2018 remains almost one percentage point higher than the lowest level registered in 2008. Unemployment rates are still particularly high in certain Member States.

Employment gains continue to be more prominent in terms of employed persons than of hours worked. The volume of total hours worked in the EU kept increasing in 2017 – though more slowly than total employment – and is not yet back to the 2008 level. A high number of involuntary part-time workers (i.e. workers who are in part-time but would like to work more), still 1.3 million above 2008, also suggests that there is remaining slack in the labour market. The decreasing number of hours worked per person is nonetheless part of a structural trend that started in the early 2000s.

Wage setting frameworks (including minimum wages) are starting to react to the improvement in labour market conditions. In particular, statutory minimum wages were increased in several countries, with the involvement of social partners. This development is important in view of the persistently high rates of people at risk of in-work poverty in a number of Member States, which also require action in the areas of tax design and benefits adequacy. Against this background, it is important that the adjustment in minimum wage levels follows transparent and predictable rules, taking into account their impact on competitiveness, job creation and the risk of in-work poverty.

The labour market situation of young people continues to improve, but youth unemployment remains high in a number of Member States. While steadily declining and back to the 2008 level, the youth unemployment rate (age group 15-24) presents large differences across countries with very high rates in some of them.. Overall in the EU, almost 6 million young people aged 15-24 were neither in employment, education or training (NEET) in 2017. If prolonged over time, detachment of young people from the labour market can have negative consequences for social cohesion and potential growth as well as negative effects for the individuals concerned, such as the depreciation of skills and a higher risk of poverty and social exclusion later in life. Actions taken by Member States in line with the 2013 Council Recommendation establishing the Youth Guarantee are key drivers for improvement. 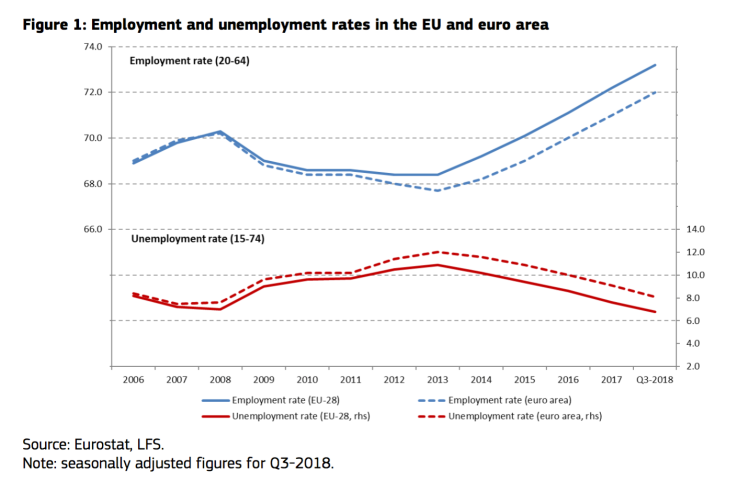 Like Loading...
« Future of Work and Skills System for Scotland and Northern Ireland – A focus on young people alone will not be enough
Future of work and STEM – A summary of technology disruptors and skills needed »