The Fourth Industrial Revolution is interacting with other socio-economic and demographic factors to create a perfect storm of business model change in all industries, resulting in major disruptions to labour markets. New categories of jobs will emerge, partly or wholly displacing others. The skill sets required in both old and new occupations will change in most industries and transform how and where people work. It may also affect female and male workers differently and transform the dynamics of the industry gender gap.

The Future of Jobs Report aims to unpack and provide specific information on the relative magnitude of these trends by industry and geography, and on the expected time horizon for their impact to be felt on job functions, employment levels and skills.

• Emerging in-demand roles: Among the range of established roles that are set to experience increasing demand in the period up to 2022 are Data Analysts and Scientists, Software and Applications Developers, and Ecommerce and Social Media Specialists, roles that are significantly based on and enhanced by the use of technology. Also expected to grow are roles that leverage distinctively ‘human’ skills, such as Customer Service Workers, Sales and Marketing Professionals, Training and Development, People and Culture, and Organizational Development Specialists as well as Innovation Managers. Moreover, our analysis finds extensive evidence of accelerating demand for a variety of wholly new specialist roles related to understanding and leveraging the latest emerging technologies: AI and Machine Learning Specialists, Big Data Specialists, Process Automation Experts, Information Security Analysts, User Experience and Human-Machine Interaction Designers, Robotics Engineers, and Blockchain Specialists.

• Growing skills instability: Given the wave of new technologies and trends disrupting business models and the changing division of labour between workers and machines transforming current job profiles, the vast majority of employers surveyed for this report expect that, by 2022, the skills required to perform most jobs will have shifted significantly. Global averageskills stability—the proportion of core skills required to perform a job that will remain the same—is expected to be about 58%, meaning an average shift of 42% in required workforce skills over the 2018–2022 period.

• A reskilling imperative: By 2022, no less than 54% of all employees will require significant re- and upskilling. Of these, about 35% are expected to require additional training of up to six months, 9% will require reskilling lasting six to 12 months, while 10% will require additional skills training of more than a year. Skills continuing to grow in prominence by 2022 include analytical thinking and innovation as well as active learning and learning strategies. Sharply increasing importance of skills such as technology design and programming highlights the growing demand for various forms of technology competency identified by employers surveyed for this report. Proficiency in new technologies is only one part of the 2022 skills equation, however, as ‘human’ skills such as creativity, originality and initiative, critical thinking, persuasion and negotiation will likewise retain or increase their value, as will attention to detail, resilience, flexibility and complex problem-solving. Emotional intelligence, leadership and social influence as well as service orientation also see an outsized increase in demand relative to their current prominence.

• Current strategies for addressing skills gaps: Companies highlight three future strategies to manage the skills gaps widened by the adoption of new technologies. They expect to hire wholly new permanent staff already possessing skills relevant to new technologies; seek to automate the work tasks concerned completely; and retrain existing employees. The likelihood of hiring new permanent staff with relevant skills is nearly twice the likelihood of strategic redundancies of staff lagging behind in new skills adoption. However, nearly a quarter of companies are undecided or unlikely to pursue the retraining of existing employees, and two-thirds expect workers to adapt and pick up skills in the course of their changing jobs. Between one-half and two-thirds are likely to turn to external contractors, temporary staff and freelancers to address their skills gaps.

• Insufficient reskilling and upskilling: Employers indicate that they are set to prioritize and focus their re- and upskilling efforts on employees currently performing high-value roles as a way of strengthening their enterprise’s strategic capacity, with 54% and 53% of companies, respectively, stating they intend to target employees in key roles and in frontline roles which will be using relevant new technologies. In addition, 41% of employers are set to focus their reskilling provision on high-performing employees while a much smaller proportion of 33% stated that they would prioritize at-risk employees in roles expected to be most
affected by technological disruption. In other words, those most in need of reskilling and upskilling are least likely to receive such training. 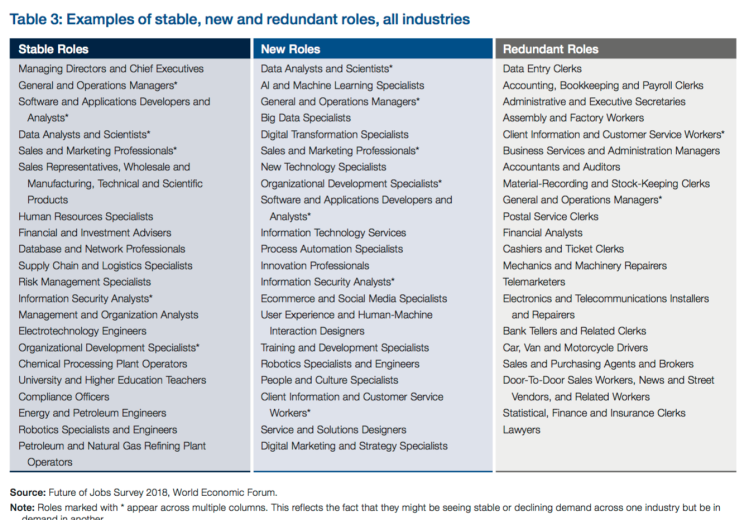 Like Loading...
« Credential Chaos in US – 308,942 credentials are adding to the confusion created by the different types of credentials
US – Labor market is operating at or beyond its full potential FRBSF finds »