The Future of Work, and Wages in Developing Countries – A bloating of service-sector employment and wage stagnation but not to mass unemployment

Automation is likely to affect developing countries in different ways to the way automation affects high-income countries. The poorer a country is, the more jobs it has that are in principle automatable because the kinds of jobs common in developing countries—such as routine agricultural work—are substantially more susceptible to automation than the service jobs—which require creative work or face-to-face interaction—that dominate high- income economies. This matters because employment generation is crucial to spreading the benefits of economic growth broadly and to reducing global poverty.
We argue that the rise of a global ‘robot reserve army’ will have profound effects on labor markets and structural transformation in developing countries, but rather than causing mass unemployment, AI and robots are more likely to lead to stagnant wages and deindustrialisation. As agricultural and manufacturing jobs are automated, workers will continue to flood the service sector, driving down wages. This will itself hinder poverty reduction and likely put upward pressure on national inequality, weakening the poverty- reducing power of growth, and potentially placing the existing social contract under strain, or even possibly limiting the emergence of more inclusive social contracts. How developing countries should respond in terms of public policy is a crucial question, affecting not only middle-income developing countries, but even the very poorest countries given the automation trends in agriculture.

Concerns about the effect of technology on jobs are not new to AI or automation. We argue that the current debate focuses too much on technological capabilities, and not enough on the economic, political, legal, and social factors that will profoundly shape the way automation affects employment. Questions like profitability, labor regulations, unionization, and corporate-social expectations will be at least as important as technical constraints in determining which jobs get automated, especially in developing countries.
Developing countries face several policy challenges unleashed by automation. Given the pace of technological change, upskilling strategies are likely not to be a panacea. Safety nets and wage subsidies may be desirable, but the question remains how to finance them (without making labor more costly and thus exacerbating a trend towards replacement). Investing in labor-heavy sectors such as infrastructure construction, social, education or healthcare provision may be a way for developing countries to manage disruptive impacts of automation though these would imply major public investments and do not in themselves substitute for a long run strategy for economic development. 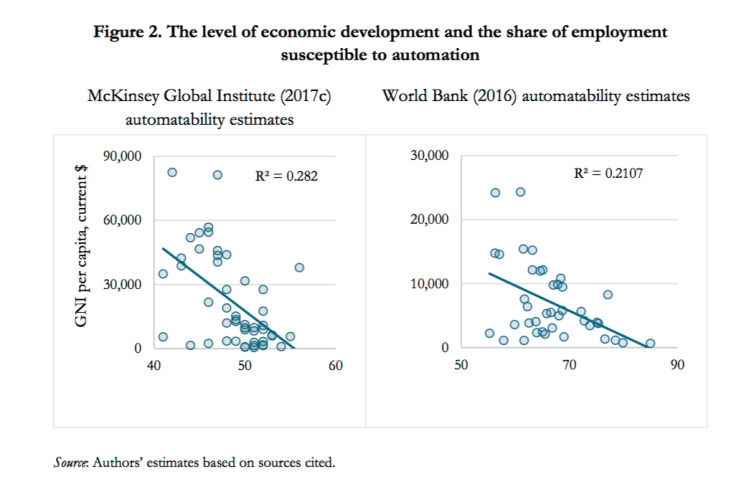 In an adaption of the Lewis model of economic development, the paper uses a simple framework in which the potential for automation creates “unlimited supplies of arti cial labor” particularly in the agricultural and industrial sectors due to technological feasibility. This is likely to create a push force for labor to move into the service sector, leading to a bloating of service-sector employment and wage stagnation but not to mass unemployment, at least in the short-to-medium term.

Chosen excerpts by Job Market Monitor. Read the whole story at The Rise of the Robot Reserve Army: Automation and the Future of Economic Development, Work, and Wages in Developing Countries – Working Paper 487 | Center For Global Development