Immigration – The assessment and recognition of foreign qualifications in OECD

Part of the observed lower return to foreign qualifications is due to differences in the performance of education systems. For example, data from the OECD Survey on Adult Skills (PIAAC) shows that there are large cross-country differences in skills at given education levels (OECD, 2016b). Likewise, the OECD Programme for International Student Assessment (PISA) has shown that the outcomes of students at age 15 vary across countries. This and other evidence suggests that the quality of education systems differs widely, especially between high- and low-income countries. However, recent OECD work has shown that a discount is observed even after accounting for such differences (OECD/EU, 2014).

An important distinction must be made between regulated and non-regulated occupations. In regulated professions and trades, where a specific registration, certificate or licence awarded by the relevant professional licencing body is generally required to protect public health and safety, holding a foreign qualification constitutes a particular barrier. Foreign qualifications are usually not accepted because training curricula and certification requirements vary strongly across countries. As a result, immigrants trained abroad cannot exercise these regulated professions unless they obtain a formal assessment and recognition of their qualification from the relevant licencing body.
In occupations that are not formally regulated, immigrants with foreign qualifications are formally eligible to apply. However, holding a foreign qualification presents an informal barrier even in these segments. Foreign credentials often do not send the same positive signals as domestic qualifications as employers are not familiar with the education and training system that they originate from. In addition, immigrant applicants are more likely than the native-born to lack domestic references or work experience, which adds to employers’ uncertainty about their skills and competencies. To improve their chances to be hired for a non-regulated job, immigrants can seek informal assessment of their qualifications in most countries.
Finally, having foreign qualifications assessed is generally required if migrants seek to pursue further studies in the host country or to carry an academic title.

There are evident benefits to having a foreign qualification recognised

Recognition improves the labour market prospects of immigrants, regardless of their migration category, field of expertise, or the origin of their degree (Damos de Matos and Liebig, 2014; Liebig and Huddleston, 2014; Brücker et al., 2015). Data from selected European OECD countries suggest that immigrants who obtained formal recognition are more often employed and work in better jobs than their peers whose applications were not successful, or the large majority of migrants who never underwent an assessment process in the first place. The observed differences in over-qualification rates between the native-born and foreign-born are significantly lower for immigrants who applied for recognition (see Figure 2). The improvement associated with recognition is particularly pronounced for immigrants from lower-income countries, where education systems often tend to perform less well. At the same time, employers may face higher levels of uncertainty when assessing the value of qualifications from such countries, making an official recognition particularly informative of the real value. 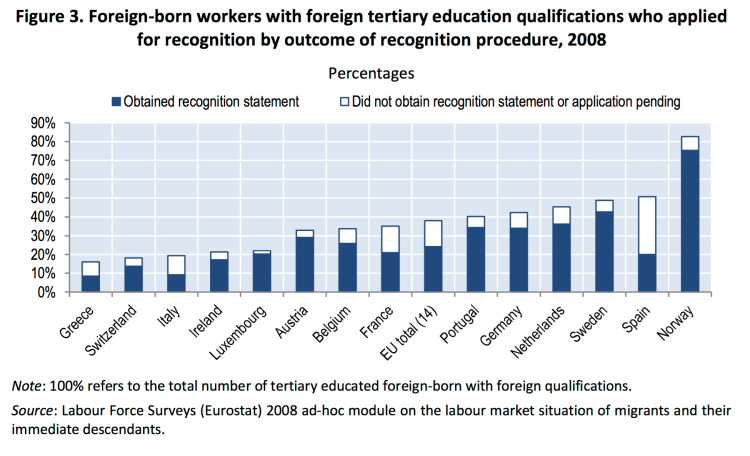 This booklet identifies these barriers and presents ten lessons about effective tools and components of recognition policy that policy makers can use to raise the benefits of recognition for immigrants, employers and origin countries. The policy tools presented in this booklet tackle issues of recognition whilst addressing other related factors at the same, thus providing a comprehensive and holistic approach to recognition and integration policy. Although assessment and recognition procedures are often undertaken for the purpose of further education in the host country, the focus of this publication is on the labour market.