In relation to its size, Sweden has long accepted more refugees than any other European country. So when over a million migrants came to Europe last year, with even more on their way this year, a large share sought asylum in Sweden.

Attracted by Stockholm’s generous immigration policies, more than 160,000 migrants applied for refugee status in Sweden in 2015, a per-capita rate more than six times the EU average. The sheer scale of this influx is set to change Sweden in profound ways.

This week, the Swedish government doubled its budget for integrating the new arrivals, especially when it comes to training and finding them jobs. This is increasingly stoking tensions with the locals, pushing officials to rethink some aspects of their open-door policy.

Still, the unprecedented influx of migrants in recent years is already set to rewrite Sweden’s demographic destiny. A new forecast by the country’s statistics agency projects population growth in the next few years that will be the fastest recorded since “a few individual years during the 19th century.” 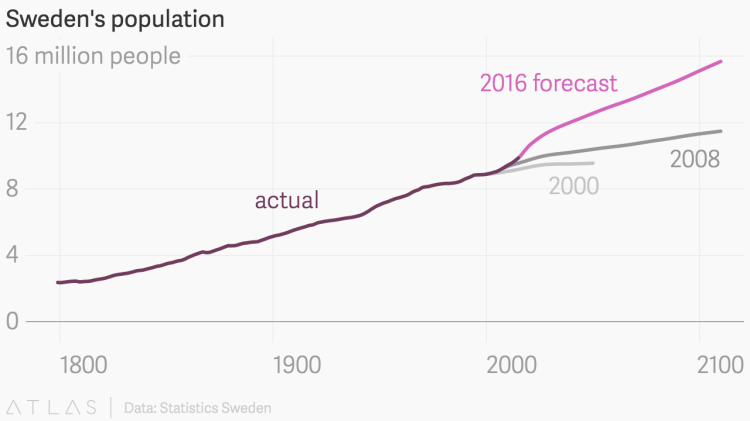 This report assesses how new immigrants to Sweden fare in the country’s labor market. The report is part of a series of six case studies on labor market outcomes among immigrants to European Union countries. The report shows that employment rates during newcomers’ initial years in Sweden are relatively depressed for low-educated refugees and migrants … Continue reading →

Europe is facing its biggest refugee inflow since World War II. Estimating the number of arrivals remains very challenging, but over one million asylum applications could be received this year in the European Union (EU), up from 630 thousand applications in 2014, with an estimated 350-450 thousand people likely to be granted refugee or other … Continue reading →

Sweden, Norway, Denmark and Finland, countries that long set the standard for welcoming refugees from war and persecution, are rapidly rethinking their generosity as the tide of migrants to Europe strains their budgets and roils their politics. The abrupt change in the Nordic nations is one of the most striking consequences of the surge into … Continue reading →

Like Loading...
« Kids Career Counselling – Who + Why = What
Immigration to United States – At a numerical high, reaching 42.4 million people in 2014 »