Recruitment – Most hiring is a blind date, and referrals are an introduction

Hiring team members requires filtering for different hard and soft skills, so that new employees can slip into established patterns of company behavior. In this case, many companies depend on asking their employees to double as HR recruiters by leaning on referrals. 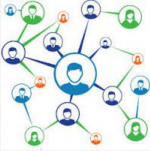 Researchers have long known that referrals surface better job candidates. Referred candidates are more likely to get call backs, more likely to be hired, and more likely to stay at the company. Furthermore, they had a pretty good theory about why referrals work. Most hiring is a blind date, and referrals are an introduction. They give both sides a little bit more certainty and information about fit. But academics couldn’t figure out why referred candidates were actually better. A May 2013 paper suggests an simple answer: Company referrals don’t work because they yield smarter workers. They work because they yield better fits.

The study found that referrals produce “substantially higher profits per worker” who are “less likely to quit,” “more innovative,” and “have fewer accidents—all this, even after controlling for factors like college, SAT scores, and IQ. Team-based companies require openness, compatibility, and a willingness to cooperate. Referral programs work because great employees pass along workers who similarly match the company culture.

Although they account for only six percent of total applications, referrals now result in more than a quarter of all hires at large companies, according to a recent paper from the Federal Reserve Bank of New York and MIT. But while referrals are extremely useful, they can create their own problems. Many industries—tech and media, for starters—are infamous for disproportionately hiring white, upper-middle class young men who went to elite colleges. Relying exclusively on referrals could deepen workplace homogeneity.

What’s more, referrals help winnow the applicant pool, but that’s not nearly enough. As the New York Fed study showed, the majority of jobs are still filled without referrals and the majority of referred candidates are still rejected. More important than a strong referral program is a strong interview process. How does a hiring manager distinguish between a merely acceptable candidate and the great one, without devoting thousands of hours learning the secret talents, hobbies, and motivations of every single applicant?

Chosen excerpts by Job Market Monitor. Read the whole story at  How to Find the Perfect Worker – The Atlantic

Like Loading...
« White-Guy Jobs Gap in US – 2.3 percentage points (or about 1.1 million jobs), a larger shortfall than any other group
Social and Emotional Learning (SEL) – Three key opportunities to use technology »