Skills shortages have developed in certain fields and regions in recent years. Earnings premiums for people in some professions, notably health, engineering and skilled trades have increased. And vacancy rates have risen for skilled trades, with the increase being particularly large in Alberta and Saskatchewan. While reforms have been implemented to strengthen adjustment so as to overcome these shortages, there is still room to go further by improving labour market information, increasing responsiveness of the education and training system to labour market demand, making the immigration system more reactive to current labour market conditions and reducing regulatory barriers to inter-provincial labour mobility.

Ontario and the Atlantic provinces have had the largest rises in earnings premiums at the post-secondary certificate/diploma level and the smallest declines at the university degree level (Table 1). In the Prairie provinces, the increase in the earnings premium for a post-secondary certificate/diploma was almost the lowest in Canada and the decrease for a university degree was the greatest, despite higher increases in real earnings for people with PSE credentials than elsewhere. This result reflects the fact that real earnings for people with a high-school credential rose far more than in the rest of the country. The large increases in real earnings at all levels of education attainment combined with small increases in earnings premiums suggests that the Prairie provinces have been more subject to across-the-board labour shortages than to skills shortages. And for interprovincial mobility incentives, it is real earnings differences that matter, not local skills premiums. 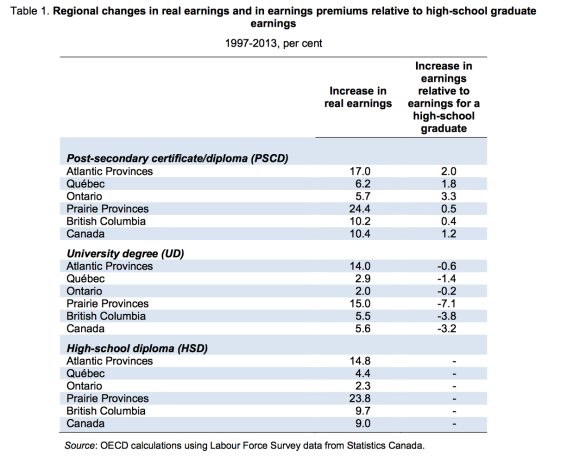 Job-vacancy data suggest that demand for skilled tradespersons has grown faster than supply during the current business cycle. Indeed, vacancy rates in the skilled trades now exceed those in science-based occupations (e.g. engineers) (Figure 5). Skilled-trade vacancy rates have increased more and are higher in Alberta and Saskatchewan than in the rest of the country.

A big part of the skills shortages in Alberta is in the construction sector for the energy industry. With resource projects getting underway in other parts of the country, such as LNG in British Columbia and oil and gas in the Atlantic Provinces, and further expansion of oil-sands projects to come, these shortages could become acute if promoters do not agree to phase development so that their demands for construction workers do not peak simultaneously.

For the past eight years, manufacturers in Canada have been fighting an uphill battle. From the downturn of the US economy and the rising Canadian dollar, to skilled labour challenges and off-shoring trends – manufacturing here has faced tough headwinds. Today, times are finally moving in a direction that helps rather than hinders manufacturers, according … Continue reading →

Canada / The myth of the skills shortage

Canada’s federal politicians are fond of trumpeting that Canada’s economy has performed better than almost any other jurisdiction, and that we should be thankful for their “prudent economic management.” In actual fact, however, the hard numbers indicate that Canada’s jobs performance has been ho-hum at best — and isn’t getting any better. Part of the … Continue reading →

Canada / No shortage of workers, invest in training say studies

Two major recent studies provide excellent overviews of recent developments in the Canadian job market, and an informed framework for thinking about our future skills needs writes The Globe and Mail Continue reading →

“From an economy-wide perspective, it is hard to make the case that widespread labour shortages currently exist” says TD Continue reading →

Canada / Is the widespread assumption that Canada is suffering from a growing shortage of labour true?

“When the Royal Bank of Canada was recently caught up in a maelstrom of bad publicity over its use of temporary foreign workers, it led politicians and pundits to scrutinize and question the growing use by Canadian firms of imported, short-term labour” Kevin McQuillan in ALL THE WORKERS WE NEED: DEBUNKING CANADA’S LABOUR- SHORTAGE FALLACY (Adapted … Continue reading →

Canada will open its doors to 3,000 skilled tradespeople starting next year under a new immigration stream set to launch Jan. 2, 2013, Immigration Minister Jason Kenney announced Monday. “The new skilled trades stream will help address serious labour shortages in some regions of the country, and support economic growth,” he said. “For too long, … Continue reading →

Canada | The Issue is Unemployment Not Labour Shortages

The federal government is basing labour market policy on the belief that,  as Jason Kenney pithily puts it in today’s Globe, there are “large and growing labour shortages.”  Hence moves to bring in even more temporary foreign workers at lower than average wages, and to push EI claimants into supposedly available jobs. Not that the … Continue reading →

Canada has poor labour market information and as a result we do not have answers to simple questions that affect Canadians’ livelihoods. Employers complain they cannot find enough skilled workers, yet the Canadian unemployment rate is far from its lowest level. Does Canada not have enough workers or are they in the wrong places with … Continue reading →

Skills Gap in Canada – How the myth was shattered

It took nine months of detective work by economists, journalists, social media sleuths and investigators at the Parliamentary Budget Office to solve the mystery of Canada’s missing job vacancies.  Last week auditor general Mike Ferguson made it official: the federal government was using unreliable statistics to support its claim that Canada had plenty of jobs … Continue reading →

Like Loading...
« US – The leisure and hospitality industry accounted for almost 1 out of every 5 nonfarm jobs added during the recovery
Job Dissatisfaction – Signs your job isn’t for you »