The Great Recession of 2007–2009 and its aftermath have posed the most serious challenge to unemployment insurance (UI) financing since the state UI programs were established during the late 1930s. Since 2008, 36 of the 53 state UI programs have borrowed from the U.S. Department of the Treasury (Treasury) to finance benefit payments in the so-called regular state UI programs, the state-financed programs that typically pay up to 26 weeks of benefits to claimants. State program loans from the Treasury peaked in April 2012 at $41 billion, larger than in any previous recession. In order to repay these loans, states have raised their UI payroll tax rates during a sluggish recovery, and their payroll tax rates will remain relatively high until states’ UI trust funds are replenished. Nevertheless, if the recovery continues at its current modest pace, it seems likely that several large states will owe substantial amounts beyond 2015. Also, a recession in the next few years would return many state trust funds to insolvency and lead to further borrowing.

Wayne Vroman and Stephen A. Woodbury examine the financial problems facing the state UI systems and reviews possible ways of placing those systems on a more stable footing in Financing Unemployment Insurance in the National Tax Journal.

Unlike Social Security, UI is not a pay-as-you-go system, at least in principle. Rather, the intent of having each state place its UI payroll taxes in a trust fund with the Treasury is to “forward-fund” UI so that in a recession funds needed to pay benefits will be avail- able and UI will serve as an automatic stabilizer (Advisory Council on Unemployment Compensation, 1995).

The simplest measure of trust fund solvency is the reserve ratio — net trust fund reserves as a percentage of total payrolls — which can be calculated for each state individually or for all states aggregated. Figure 2 shows that the aggregate reserve ratio (the darker line) has trended downward over the last 50 years; indeed, in the years preceding the Great Recession, the aggregate reserve ratio was lower than it had been before any other recent recession. Figure 2 also shows a key reason for this decline: the tax revenues collected for UI (as measured by the UI “cost ratio,” or tax contributions as a percentage of total wages) trended down from 1.0–1.3 percent during the 1980s to 0.5–0.8 percent during the 2000s (the lighter line). 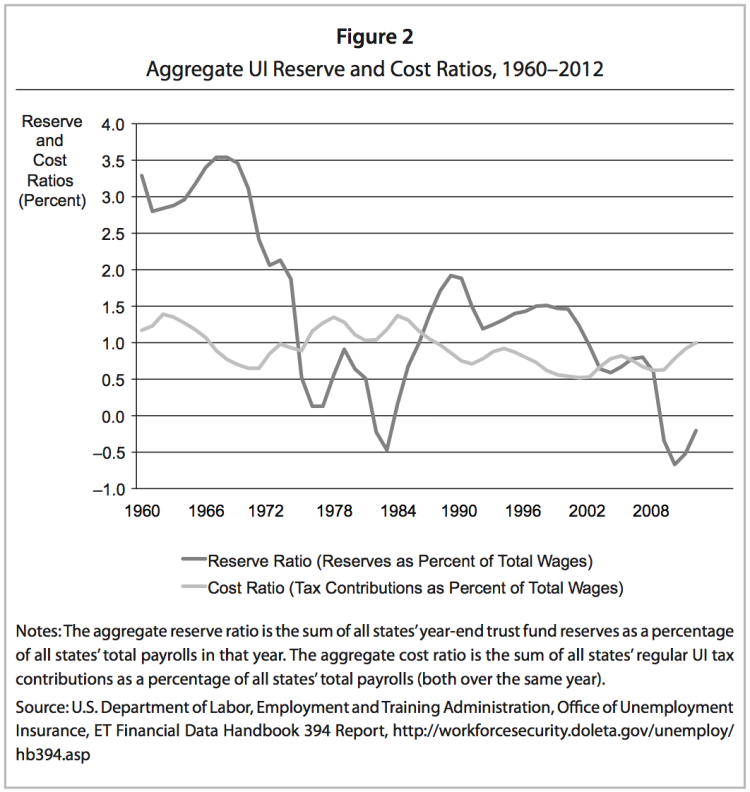 Low and declining reserve ratios have three consequences. First, when unemploy- ment rises in a recession, the trust funds of states with low reserves quickly become insolvent; these states must borrow (usually from the federal government) to pay UI benefits. For example, during and after the Great Recession, the trust funds of 36 states became insolvent, and these states borrowed in excess of $40 billion from the federal government (Vroman, 2011).

Second, states that borrow must ultimately repay the federal loans, usually with interest, which means raising above-normal revenues. As already discussed, in most states, tax rates rise automatically when trust funds become depleted, and states may add surcharges to repay loans. Further, if loans are not repaid in a timely manner, the federal government assesses penalties through reductions in the FUTA tax credit. These reductions (which are effectively tax increases) may occur in a weak economy and a slack labor market (as they have during the Great Recession), placing a drag on recovery and hampering the ability of UI to act as an automatic stabilizer. A state that forward funds UI by building up adequate trust funds during a period of growth avoids such fiscal drag (Advisory Council on Unemployment Compensation, 1995).

Like Loading...
« IMF – There is growing evidence that high income inequality can be detrimental to achieving macroeconomic stability and growth
UK – Employment continues to increase, unemployment to fall writes ONS »