Japan / Working Women are the most underutilized asset

This month, prime minister Shinzo Abe will begin unveiling Japan’s “national growth strategy,” the structural reforms from the “third arrow” of Abenomics. This will include a crucial one: boosting female employment. Already, Abe has called on corporations to have at least one female executive per company (paywall). The government also plans to open 250,000 daycares over the next few years. 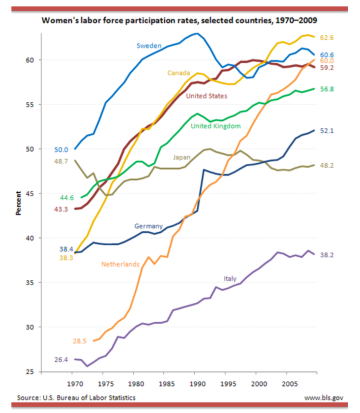 Let’s hope Abe and company have a few more ideas up their sleeves. Making good use of what Goldman Sachs economist Kathy Matsui calls “its most underutilized asset”–the some 8.2 million women who would be employed if the female labor participation rate were equal to that for men (62% vs. 80%)–could add up to 15% to Japan’s GDP. Failing to do so will sink Abenomics.

Right now, Japan has one of the lowest female participation rates of developed economies; only one-third of Japanese mothers work.

via Working Women Are Japan’s Only Hope for Avoiding Economic Catastrophe – Gwynn Guilford – The Atlantic.

Like Loading...
« UK / 67% of working mothers believed having children has hindered their progress at work
Myanmar / Coca-Cola plant to create 22,000 jobs »