COVID and Labour Market – A far-reaching impact in Europe

The EU-27 countries have introduced varying degrees of stay-at-home mandates or advisories owing to COVID-19, as has the United Kingdom. As of April 7, almost all of the 230 million employees across the EU-27 and the United Kingdom are affected—through the closing of nonessential shops, implementation of remote working and physical-distancing guidelines, cancellation of events, institution of travel bans (including internal travel, in the case of Italy), and in some cases, even full-on production stops.4 This has had a significant impact on the economy, with reduced discretionary spending and consumer confidence, putting many companies in a precarious position.

During the financial crisis of 2008–09, employment in the United States fell faster and deeper than that in the EU-28—likely a result of more flexible labor regulation—but it returned to precrisis levels by the end of 2014. The European economy, in contrast, only started to turn around in 2013 and did not return to precrisis employment levels until the fourth quarter of 2016.5

Some changes in employment during a crisis might be necessary owing to operational inefficiencies that become pronounced by the crisis but that are not caused by it. However, the COVID-19 crisis has the potential to dramatically accelerate structural adjustments and disruptions that were already underway in many important industries in Europe, such as the manufacturing and automotive sector, robbing business leaders and policy makers of much-needed time. Hence, there is an urgent need to avoid short-term employment decisions that could harm companies and their respective economies in the long run. There is an equally urgent need to find solutions to soften the social impact of the rapid acceleration of structural adjustments brought about by the current crisis.

The need to find a solution because of the economic impacts of unemployment—which can be significant and far reaching—is urgent. Less employment means less income for people, which in turn slows down consumption. As a result of lower demand for goods and services, companies will experience lower revenues. Government financial burden will increase significantly, as revenues from employment and consumption taxes will decline at the same time as costs to the welfare system increase, potentially leading to higher taxes.

The need to find a solution because of the social consequences of unemployment—which, although difficult to quantify, can also be significant—is equally urgent. Inequality in society is exacerbated by higher unemployment rates, as social-welfare systems cannot fully alleviate the negative effects of a loss in employment. Increases in crime rates and social unrest are also potential consequences of an increase in unemployment.6 Moreover, unemployed people are twice as likely as employed people to experience mental illness (the rate can be even higher for lower-wage workers), and they receive inpatient treatment more often.7 Unemployed people also suffer from stigma and lower life satisfaction.

While there is great uncertainty about the depth and duration of the downturn, the McKinsey Global Institute (MGI) estimates that the COVID-19 pandemic could almost double Europe’s unemployment rate in the coming months. Two dimensions will drive how bad the economic fallout of the current crisis will be: the economic impact of the virus spread, will depend on the effectiveness of the public-health response, and the economic impacts of the knock-on effects, which will depend on the public-policy responses to mitigate these effects.

In the two most likely scenarios modeled by MGI, the spread of COVID-19 is eventually controlled, and catastrophic structural economic damage is avoided.8 The more optimistic of the two scenarios assumes that the virus would be controlled within two to three months of economic shutdown, resulting in unemployment peaking at 7.6 percent in 2020 before returning to the precrisis level of 6.3 percent by the fourth quarter of 2021.

The more pessimistic scenario assumes that Europe fails to contain the virus within one quarter and is forced to implement ongoing physical-distancing and quarantine measures throughout the summer, making the impact more severe. The unemployment rate for the EU-27 in this scenario is projected to peak in 2021—at 11.2 percent—and is unlikely to recover to 2019 levels by 2024.9

While it should be noted that most government unemployment statistics are lagging, meaningful indicators released for three large European economies are telling. In Germany, company applications for Kurzarbeit (the German program for short-time work allowance) rose from 1,900 in February to more than 725,000 between March 1 and April 13.10 For comparison, during 2019, 1,300 companies, on average, applied for short-time working arrangements each month.11Kurzarbeit was used almost exclusively by metals, high-tech, and other manufacturing industries during the 2009 financial crisis, accounting for approximately 80 percent of all the employees in the program. In the current crisis, applications come from almost all sectors but mainly from transport and logistics, accommodation, and food and tourism.12 In the United Kingdom, applications for “universal credit” increased nearly tenfold between the last two weeks of January and the last two weeks of March—to 950,000.13 Meanwhile, the number of reported unemployed people in Spain rose by more than 300,000 between February and March, an increase of 9.3 percent.14

The sharp rise in benefit filings might just be the tip of the iceberg. We estimate that up to nearly 59 million jobs (26 percent of total employment) across Europe are potentially at risk of reductions in hours or pay, temporary furloughs, or permanent layoffs.

To arrive at this figure using a granular approach, we first used occupation-level data to identify professions that are likely to be prevented from a quick return to business as usual, based on the necessary physical proximity to coworkers and exposure to the general public. We sorted occupations into three categories:

Second, after determining the occupation-level risk, we used the model to estimate an additional, industry-specific risk factor for each job, based on short-term changes in demand because of the COVID-19 outbreak.

The breakdown of jobs at risk by job cluster in Exhibit 1 shows that 50 percent of all jobs at risk in Europe come from customer service and sales (25 percent), food services (13 percent), and building occupations (12 percent); production work (9 percent), office support (8 percent), and community services (8 percent) make up another 25 percent. Less affected are workers in the health, science, technology, engineering, mathematics, business, and legal professions; educators; and trainers. 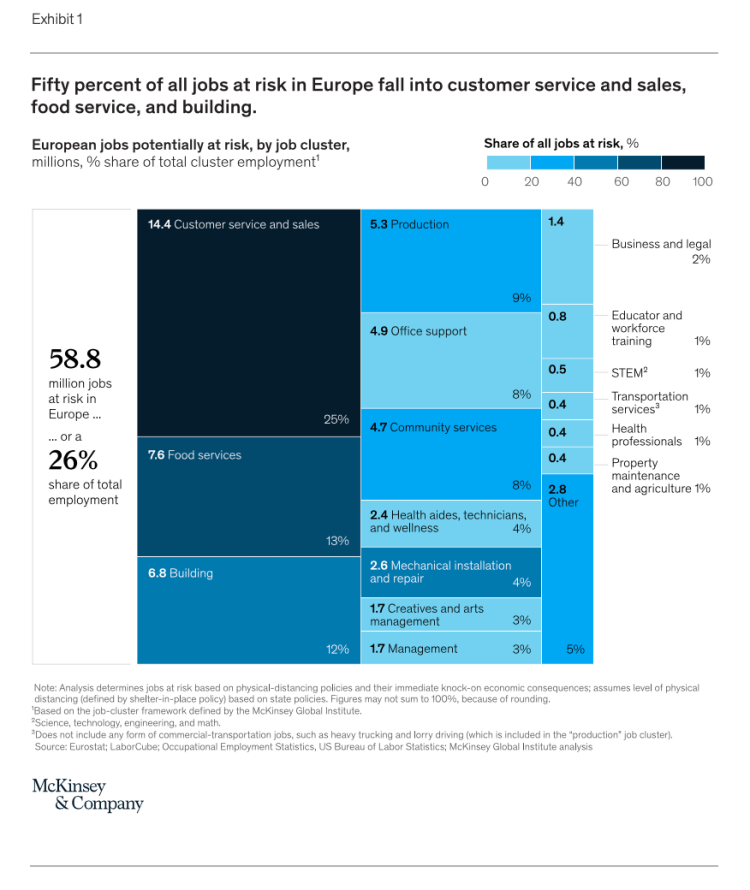 Like Loading...
« COVID and Universities in US – It poses serious financial risks
COVID and UI Claims in US (Update) – More than 26 M claims since the beginning of lockdowns with 20% of jobless »