Compared with November 2018, employment gains otalled 293,000 (+1.6%), with the increase largely accounted for by full-time work. Over the same period, total hours worked grew by 0.2%.

In November, employment declined in Quebec, Alberta and British Columbia, while it was little changed in the other provinces.

Employment was down for men in the core working ages of 25 to 54 and women aged 55 and over. 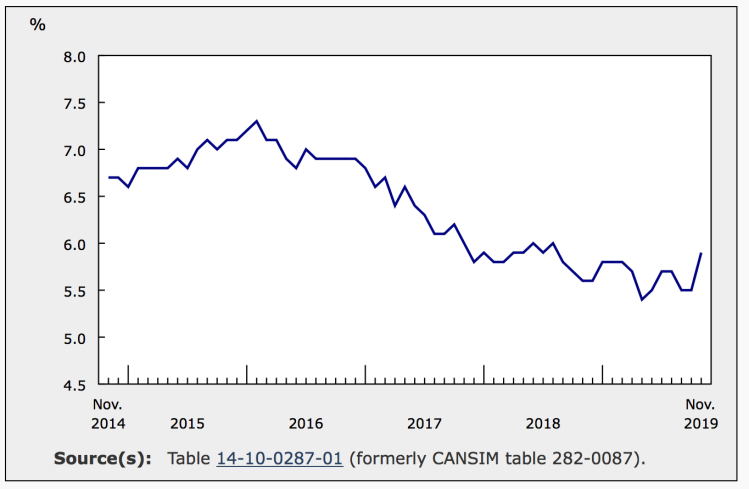 Employment down in Quebec, Alberta, British Columbia
In Quebec, 45,000 fewer people were employed in November, with the decline largely attributable to manufacturing as well as accommodation and food services. As more people searched for work, the unemployment rate in the province increased by 0.6 percentage points to 5.6%. Despite the monthly decline, total employment in Quebec was up by 45,000 (+1.0%) on a year-over-year basis.

Employment in Alberta fell by 18,000 in November, with declines occurring in a number of industries, led by wholesale and retail trade. On a year-over-year basis, total employment in the province was little changed. With more people seeking employment, the unemployment rate in Alberta rose by 0.5 percentage points to 7.2% in November, a rate observed as recently as August.

Employment in British Columbia also fell by 18,000 in November, with declines spread across several industries. Compared with 12 months earlier, employment in the province was little changed. The unemployment rate rose to 5.0% in November from 4.7% in October.

While employment in Ontario held steady in November, the unemployment rate increased by 0.3 percentage points to 5.6% as a result of more people looking for work.