Millennials had higher incomes and median wealth than young Gen-Xers at the same age, but also considerably more mortgage debt

Examining debt and wealth for young households, who have begun to accumulate assets and debt over a period of sustained home price inflation, provides another perspective on the health of balance sheets in Canada. A new Statistics Canada study compares financial outcomes for millennials with those of Gen-Xers when they were at the same age.

The study suggests that while millennials were wealthier than young Gen-Xers, they were also more indebted, reflecting higher levels of mortgage debt. Major differences were observed among millennials, as those who invested in the housing market, or were living in Toronto or Vancouver were considerably better off. The study is part of a series aimed at providing information on debt and wealth across the country.

Higher incomes suggest different potentials for saving and wealth accumulation. Median net worth—meaning total household assets minus total debts—was higher for millennials than for young Gen-Xers. Median net worth reached $70,600 for millennials, over one and a half times the level for young Gen-Xers ($42,800). To accumulate wealth, households typically take on both assets and debts over their life course. Although millennials were better off than young Gen-Xers in terms of assets or median wealth, they were relatively more indebted, as they carried considerably more mortgage debt. 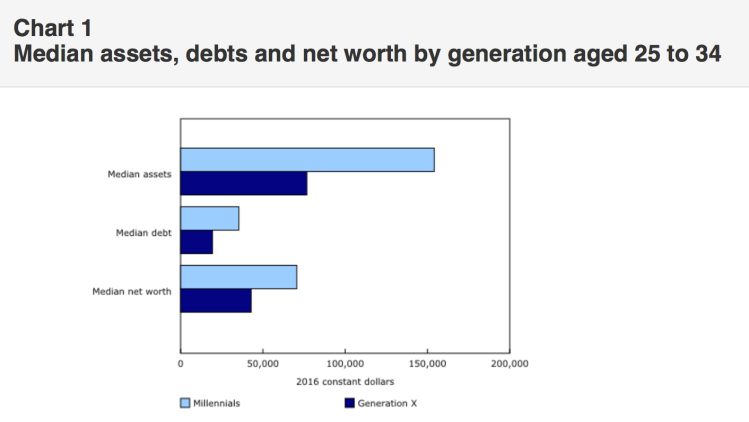 Chosen excerpts by Job Market Monitor. Read the whole story at The Daily — Study: Economic well-being across generations of young Canadians: Are millennials better or worse off?

Like Loading...
« Wages – Decline in organized labor has reduced the bargaining power of labor across the developed world Bridgewater says
Unemployment Insurance Weekly Claims in US, April 13 – Down at the lowest level for initial claims since September 6 »