Sweden – The unemployment rate dropped to 7.8 percent in January 2017 and varies in different parts of the country

Where you live in Sweden can have a significant impact on your likelihood of being unemployed, the latest figures from national employment agency Arbetsförmedlingen show.

While the unemployment rate for Sweden as a whole dropped to 7.8 percent in January 2017 compared to 8 percent a year prior, the agency’s stats show that the rate varies between Sweden’s 21 counties.

University city Uppsala and its surrounding county has the lowest unemployment rate in the country at 5.9 percent. But a short drive north to Gävleborg sees the rate hit 11.4 percent – the highest in Sweden.

Similarly, Stockholm is the county with the second lowest unemployment rate (6 percent), but a short drive west to Södermanland sees the rate shoot up to the second highest in Sweden, 11 percent.

“The chances of employment vary in different parts of the country. But we can see that those who have an upper secondary school education have a better chance in general. That applies particularly to industries where there is a shortage of labour, like in educational work, construction and IT,” Arbetsförmedlingen’s head analyst Annika Sundén explained a press release.

The variation in unemployment rate between Sweden’s 21 counties can be observed at a glance with the interactive map below. 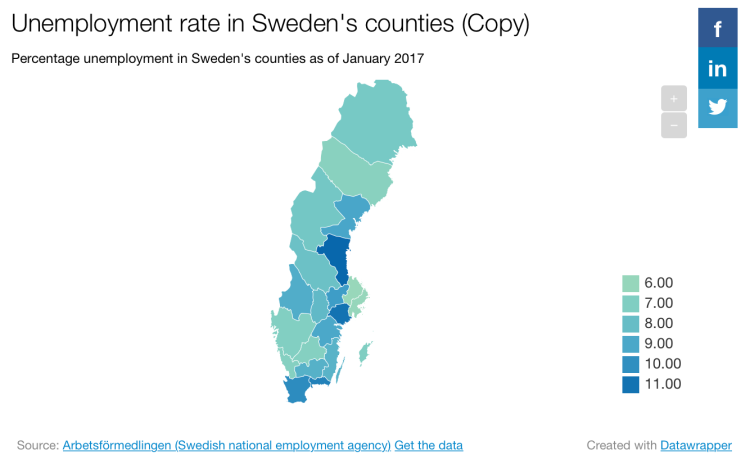 Chosen excerpts by Job Market Monitor. Read the whole story at This map shows where you’re most likely to be unemployed in Sweden – The Local

Like Loading...
« Immigration in Canada – Prior host-country work experience as a criteria would improve integration
Automation and skills – More education, and different kinds »