Job Growth in US – Startup businesses at historically low rates

The U.S. economy is inching along, productivity is flagging and millions of Americans appear locked out of the labor market.

One key factor intertwined with this loss of dynamism: The U.S. is creating startup businesses at historically low rates.

The American economy has long relied on fast-growing young companies to fuel job growth and spread the latest innovations. As recently as the 1980s and 1990s, a small number of young firms disproportionately contributed to U.S. employment growth, helping allocate workers and resources to burgeoning segments of the economy.

But government data shows a decadeslong slowdown in entrepreneurship. The share of private firms less than a year old has dropped from more than 12% during much of the 1980s to only about 8% since 2010. In 2014, the most recent year of data, the startup rate was the second-lowest on record, after 2010, according to Census Bureau figures released last month, so there’s little sign of a postrecession rebound. 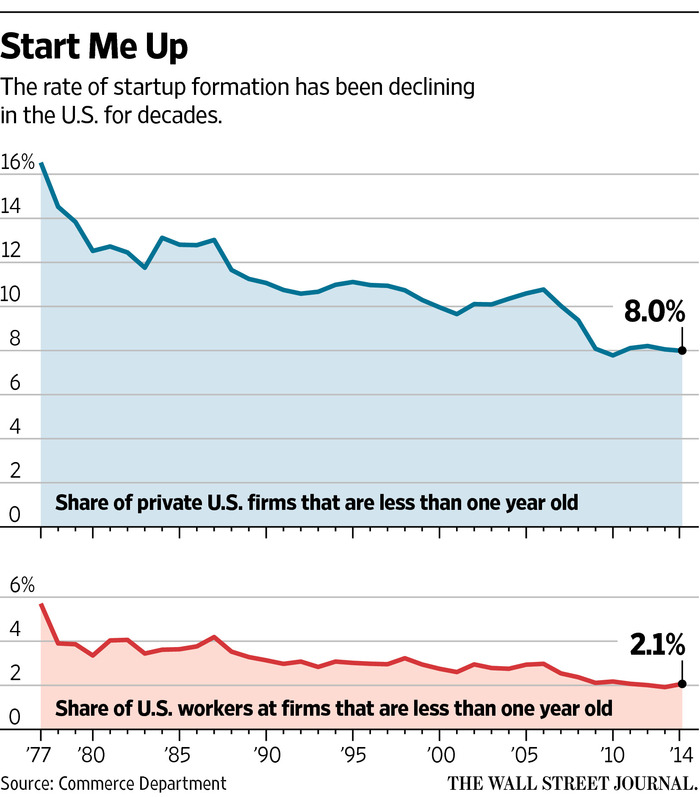 Like Loading...
« Hiring Tech Apprentices in UL – Overcoming the barriers
Skills Gap in US – For the seventh consecutive year, skilled trades are the hardest to find »