The number of people receiving regular Employment Insurance (EI) benefits totalled 496,600 in January, virtually unchanged from the previous month. Compared with January 2014, the number of beneficiaries decreased by 14,200 or 2.8%.

In January, four provinces had more beneficiaries compared with a month earlier: Newfoundland and Labrador, Alberta, Saskatchewan and Nova Scotia. In contrast, there were fewer beneficiaries in British Columbia and New Brunswick. There was little change in the other provinces.

The change in the number of regular EI beneficiaries reflects various situations, including people becoming beneficiaries, people going back to work and people no longer receiving regular benefits. 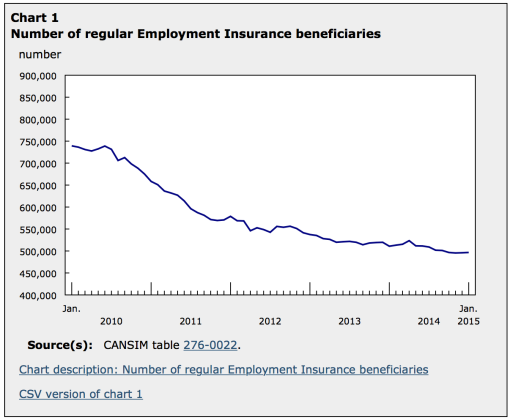