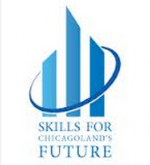 president and CEO of public-private partnership Skills for Chicagoland’s Future, an initiative backed by U.S. Commerce Secretary Penny Pritzker. Lynch has been working to prove the model since 2012 when she pivoted from predecessor Chicago Career Tech. That organization focused on retraining workers to find tech jobs; the new one signs up potential employers first. Lynch was appointed earlier this month as co-chair of the National Advisory Council on Innovation and Entrepreneurship and chair of its workforce committee. She explains her progress and lessons.

Q. What drove the pivot?

A. At Chicago Career Tech, our model wasn’t necessarily tied to a commitment to hire people. We had been experimenting with different models and solutions of working with businesses. For one model, we worked with businesses to understand what their hiring gap and training need was. We had a 20 percent to 25 percent higher placement rate when we used this model. Now that we only employ that model (under SCF), we’re essentially at a 100% placement rate because we only work with companies that agree to hire.