Australia’s standard of living, defined as real GDP per capita, is in danger of declining by as much as 8 percent over the next 15 years unless the government addresses structural changes in the post-mining economy, the dislocation of jobs in several key industries, the employment skills gap and an aging workforce, according to a new report by Accenture NYSE:ACN.

The Accenture report, For Richer, For Poorer? Government’s Role in Preserving Standard of Living, suggests that changing demographics are responsible for several challenges straining the financial and human resources used to measure standard of living. As outlined in the report, workforce participation would need to increase by .31 percent per year, and productivity growth would need to climb .4 percent annually to simply maintain the current standard of living by 2030 see chart below. Yet, according to the Australian Bureau of Statistics, the proportion of employed working age adults has decreased by .7 percent over the last two years.

Australian citizens, employers, jobseekers and public employment officials expressed dissatisfaction and frustration with the institutions of the Australian labour market in our surveys:

Citizen trust in government is low.

More than 60 per cent (63 per cent) of Australian citizens have little or no trust in government’s ability to act quickly enough to address employment and skills issues. By contrast, just 36 per cent of Singaporeans share this view.

Employers are not engaging with public employment services.

Nearly one-third (32 per cent) of Australian jobseekers feel they need a fair amount or
a great deal of training to acquire the skills and job they are seeking. Only 8 per cent are not at all confident in their current skills level, with a majority (71 per cent) fairly or very confident that their current skill level is sufficient to find a job. These findings suggest that Australian jobseekers need to take responsibility of becoming ‘job ready’ and transitioning from education to employment.

Public employment service officials are not connected to employers and educators.

Though only one of many stakeholders in a labour market, government has an opportunity to play a pivotal role in orchestrating Australia’s jobs and skills environment, supporting a world-class labour market and helping address the potential decline in standard of living. 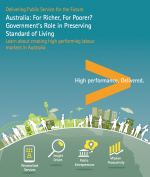 via Accenture Newsroom: Australia’s Standard of Living to Drop 8 Percent by 2030, According to Accenture.