Total nonfarm payroll employment rose by 165,000 in April, and the unemployment rate was little changed at 7.5 percent, the U.S. Bureau of Labor Statistics reported today.

The unemployment rate, at 7.5 percent, changed little in April but has declined by 0.4 percentage point since January. The number of unemployed persons, at 11.7 million, was also little changed over the month; however, unemployment has decreased by 673,000 since January.

Among the major worker groups, the unemployment rate for adult women (6.7 percent) declined in April, while the rates for adult men (7.1 percent), teenagers (24.1 percent), whites (6.7 percent), blacks (13.2 percent), and Hispanics (9.0 percent) showed little or no change. The jobless rate for Asians was 5.1 percent (not seasonally adjusted), little changed from a year earlier.

The U.S. Labor Department announced Friday morning that the economy has been steadily adding jobs, pushing the unemployment rate down to 7.5 percent from 7.6 percent. The improvement won’t mean much to people without jobs, especially people who’ve been unemployed a long time.

An economist with the labor-focused Economic Policy Institute called the report a disaster, saying it would take five whole years for the current rate of growth to return the country to full employment.

“This is a classic ‘hold-steady’ report — enough job growth to keep the unemployment rate stable but not much more,” EPI’s Heidi Sheirholz said in a statement. “In good times, this would be fine, but at a time like this, it represents an ongoing disaster.”

via Jobs Report Positive, But Not Good Enough.

Should the United States Have 2.2 Million More Jobs?

Employers added 165,000 jobs in April, according to the Bureau of Labor Statistics, following upwardly revised gains of 332,000 in February and 138,000 in March. The three-month average pace of job gains of 211,000 was slightly above the average pace of 173,000 jobs over the last twelve months. The unemployment rate edged down to 7.5 percent, and the fraction of the population reporting a job edged up. The unemployment rate has now declined 0.6 percentage point since last April, although much of this change can be attributed to declining rates of labor-market participation rather than increases in employment. 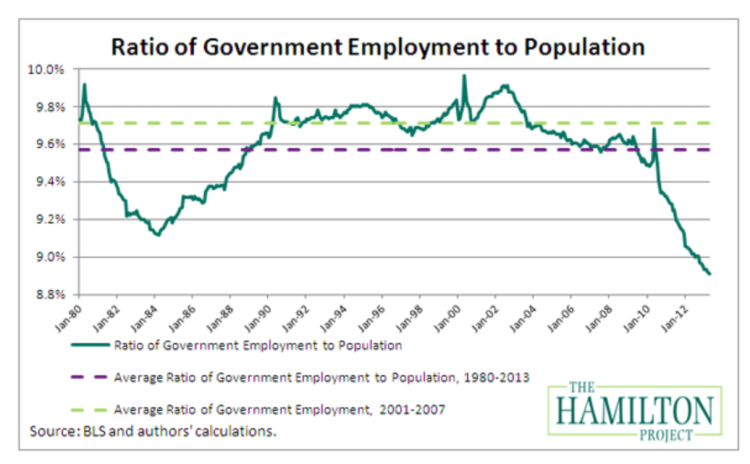 These numbers continue a pattern of steady growth in the labor market, but they also confirm that America’s recovery from the Great Recession is still very much a work in progress. The public sector, especially, has been a drag on the economy in recent months. While the private sector has added roughly 2.2 million jobs over the past year, employment in state, local, and federal governments has declined by 89,000, including significant losses to teachers and emergency responders. In this challenging economic climate, there is growing concern about how sequestration—the across-the-board budget cuts to discretionary spending that took effect on March 1—may negatively impact the recovery even more. Indeed, forecasters at the Congressional Budget Office project that the sequestration could reduce overall GDP growth in the United States by 0.6 percentage point and cost the economy 750,000 jobs by the end of 2013….

via Should the United States Have 2.2 Million More Jobs? | Brookings Institution.

U.S. employment rose more than expected in April, pushing the unemployment rate to a four-year low of 7.5 percent, which could help ease concerns of a sharp slowdown in the economy.

Still, details of the report remained consistent with a slowdown in economic activity. Construction employment fell for the first time since May, while manufacturing payrolls were flat. The average workweek pulled off a nine-month high, but average hourly earnings rose four cents,