What parts of the global income distribution registered the largest gains between 1988 and 2008? As figure below shows, it is indeed among the very top of the income distribution and among the emerging global middle class, which includes more than a third of the world’s population, that we find most significant increases in per capita income. 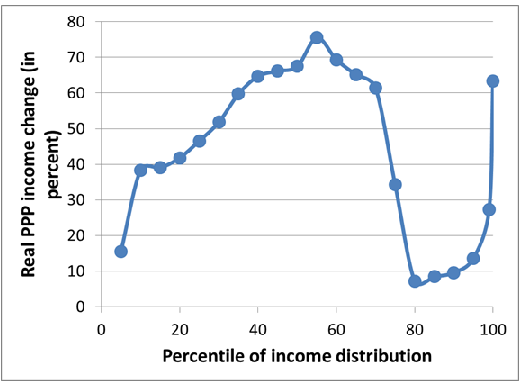 The top 1% has seen its real income rise by more than 60% over those two decades. (All the amounts are expressed in 2005 international dollars.)

An even greater increase was realized by those parts of the global income distribution that lie around the median: almost 80% real increase at the median itself, and some 70% around it.

It is there, between the 50th and 60th percentile of global income distribution (which in 2008, includes people with annual after-tax per capita incomes or consumption between 1,100 and 1,600 international dollars) that we find some 270 million Chinese, 40 million Indians, 35 million Indonesians, and about 20 million people each from Brazil, Egypt and Mexico.

The surprise is also that those at the bottom third of the global income distribution have also made significant gains, with real incomes rising between more than 40% and up to  60%. The only exception is the poorest 5% of the population whose real incomes have increased by 16% only. These numbers however should be taken with a grain of salt because among the very poor, we deal with people whose incomes are less than $PPP 300 and small variations in sample composition and measurement, can change the results by amounts of 10 or 20 dollars, per year, which, translated in percentages, may produce large gains or losses. So, the best we can say is probably that the very bottom of the global income pyramid remained about as equally poor in 2008 as twenty years earlier.

But more substantial and thus more certain increases in income among those slightly less poor allowed the proportion of what the World Bank calls the absolute poor (people whose per capita income is less than 1.25 PPP dollars per day) to decrease from 44% to 23% over approximately the same 20 years.

The biggest “non-winner” (other than the very poorest 5%) of globalization were those between the 80th  and 90th  percentile of  the global income distribution whose real income gains were in single digits. These people, who can be called a global upper-middle class, include many from former Communist countries and Latin America, as well as citizens of rich countries with stagnant real incomes.

via The Real Winners and Losers of Globalization.