Labor force participation is rising for older workers in the U.S.; therefore, while it is tempting to focus  on prime-age workers to gauge the economy’s health to avoid demographic effects, doing so misses important shifts amongst those over 54 years old.

In general, the broad trends for men and women are different: recent cohorts of women (across age spans) have been participating at higher rates than their predecessors early in life but lower rates in middle age, while recent cohorts of men have been participating at lower rates throughout prime-age years. However, those currently ages 60 to 64 (purple)—men and women alike—are both still working at higher rates than their prior cohorts. 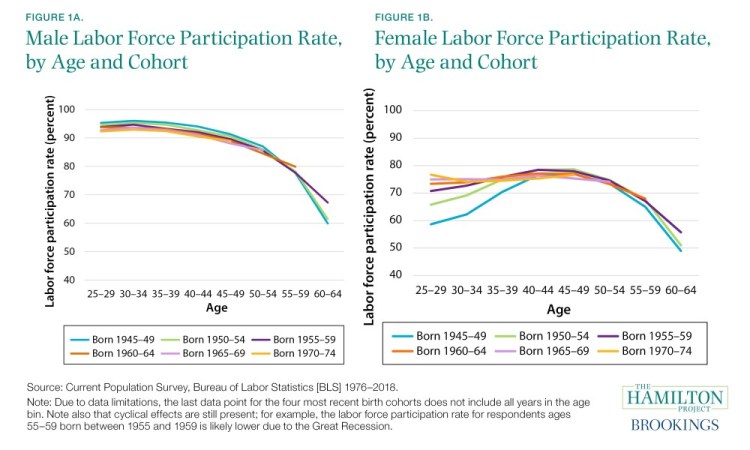 Yet this small contribution of participation rate changes to the overall decline masks the sizable shifts within gender-age groups shown in figure 2 (below):

Can older individuals be expected to continue to maintain a higher level of participation than in the past?

Chosen excerpts by Job Market Monitor. Read the whole story at Is the continued rise of older Americans in the workforce necessary for future growth?

Like Loading...
« Gig-Jobs in US – The rise is driven by earnings that are secondary and supplemental sources of income
Skills in Postings in Europe – Cedefop’s findings »