Worker-Training and Adjustment Policies in US – A reform program

There has been growing speculation that a coming wave of innovation—indeed, a tsunami—powered by artificial intelligence (AI) and robotics, will disrupt labor markets, generate mass unemployment, and shift the few jobs that remain into the insecure “gig economy.” Kneejerk “solutions” from such technology Cassandras include ideas like taxing “robots” and implementing universal basic income for everyone, employed or not. The first would

slow needed productivity growth, employed or not; the second would reduce worker opportunity.

The truth is these technologies will provide a desperately needed boost to productivity and wages, but that does not mean no one will be hurt. There are always winners and losers in major economic transitions. But rather than slow down change to protect a modest number of workers at the expense of the vast majority, policymakers should focus on doing significantly more to help those who are dislocated transition easily into new jobs and new occupations. Improving policies to help workers navigate what is likely to be a more turbulent labor market is not something that should be done just out of fairness, although it is certainly fair to help workers who are either hurt by change or at risk of being hurt. But absent better labor market transition policies, there is a real risk that public and elite sentiment will turn staunchly against technological change, seeing it as fundamentally destructive and unfair. If this happens, it will undermine support for policies that are necessary to speed automation, and it could even build support for policies that “throw a wrench” into the innovation machine. Better transition policies will have the opposite effect—they will boost GDP and help employers facing worker shortages.

Support for workers in the United States is inadequate. Indeed, the United States significantly underinvests in workforce training programs, dedicating just 0.1 percent of GDP in active labor market programs compared to the OECD average of 0.6 percent of GDP, meaning America’s OECD peers like Austria and Germany invest six or more times more in their workforce training and support programs37 (Figure 1). 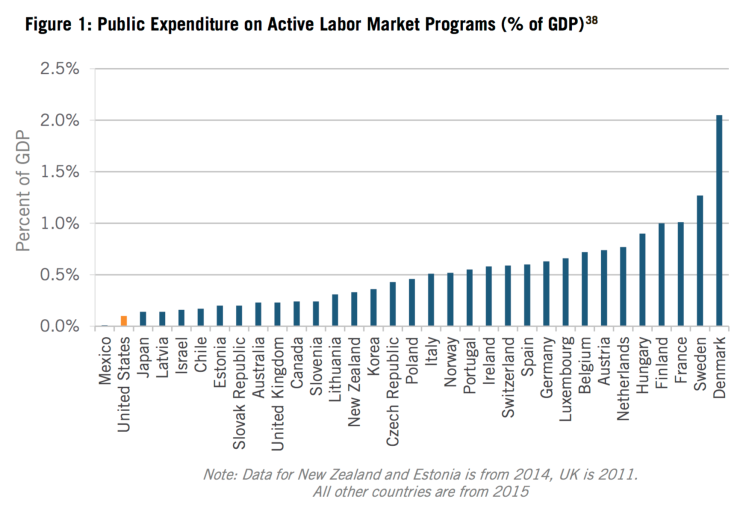 When it comes to labor market adjustment policies, most nations, including the United States, can and should do better. This report first discusses the recent and current views of technological change and employment. It then examines six issues related to technological innovation and implications for the labor market (overall number of jobs, employment relationships, income inequality, job quality, employment tenure, and worker dislocation and transition). Finally, it lays out an actionable policy agenda to ensure that workers are better positioned to navigate a potentially more turbulent, but ultimately beneficial labor market. There are four key factors that are important to reduce the costs of worker dislocation: 1) supporting full employment, nationally and regionally, not just with macro-economic stabilization policies, but also with robust regional economic development policies; 2) ensuring as many workers as possible have needed education and skills before they are laid off; 3) reducing the risk of income loss and other financial hardships when workers are laid off; and 4) providing better transition assistance to help laid off workers find new employment. Each is an area where there is more the federal government should be doing. Before turning to that discussion, it’s important to articulate several key principles that should guide policymakers as they consider this issue.
Principle 1: Embrace the next technological wave. Technology-driven innovation is central to the process of increasing living standards. That is because better “tools” allow us to produce better products and services more efficiently. It is only by boosting productivity that workers can earn more and companies can lower prices, both of which increase living standards. Ensuring robust productivity growth going forward will be critical for developed economies as they face an aging population and a declining ratio of workers to non-workers. Yet some, such as Bill Gates and economist Robert Schiller, have called for governments to slow the pace of technological innovation, either with outright bans, restrictive regulations, or taxes on “robots.” Policymakers need to firmly reject such proposals as anti-progress and instead support policies that enable the development and adoption of these technologies by all industries and organizations.

Principle 2: Support a full-employment economy. It is extremely likely that the pace of technologically driven employment disruption will increase somewhat over the next several decades. Affected workers will have much easier times making successful transitions if the unemployment rate is low, not just nationally but also in the geographic labor markets where they live. This means that nations need to ensure that national monetary policy tilts toward full employment; that nations have in place effective national economic competitiveness strategies; and that policies to support economic development in lagging regions are well funded and effectively implemented.

Principle 3: Focus on helping dislocated workers make speedy and successful transitions. In a natural impulse to alleviate hardship, some want to provide laid-off workers with very generous benefits extending for as long as they are unemployed. Others want to limit organizations’ abilities to lay workers off in response to technological change. Still others call for universal basic income for all workers. Embracing these ideas would slow economic growth and harm the very workers they are intended to help.

Rather, America needs a comprehensive, high-quality, and flexible reemployment system, along the lines that world leaders such as Scandinavian nations and Singapore have put in place. Policymakers should embrace the concept of “flexicurity,” as Scandinavian nations have, which commits not to ensuring that workers will never get laid off or paying them for long periods to the unemployed, but to minimizing the number of workers at risk; and then, for those who are laid off, providing support so they can make successful and expeditious transitions. Policymakers also should adopt the operational models of some of the world’s best-in-class programs, particularly Singapore’s Skills Future program. The lessons from Singapore are fourfold. First, federal policy needs to make a major commitment to skill development and workforce transition. Second, such efforts need to be closely linked to employers and markets (e.g., through vouchers and credits). Third, such efforts need to be much more flexible and less bureaucratic than existing efforts and take full advantage of advanced information technology tools. Finally, incremental changes in existing institutional arrangements are not enough. If policymakers are to respond effectively to the challenges of a more turbulent labor market, they will need to drive significant institutional reform. For example, U.S. federal and state governments should work to repurpose some public four-year colleges away from being broad liberal arts institutions to becoming more mission-focused on spurring employer-based skills development. Likewise, Congress should increase the federal unemployment insurance tax rate and dedicate funding to support industry-led skills initiatives, including apprenticeships, and an expansion of the Trade Adjustment Assistance Act to include workers losing their job due to technological change.

To support these principles, this report offers the following policy recommendations in four main areas:

Ensure Workers Have Needed Competencies Before They Are Laid Off

Provide incentives for employers to pay into Job Security Councils.

Chosen excerpts by Job Market Monitor. Read the whole story at How to Reform Worker-Training and Adjustment Policies for an Era of Technological Change | ITIF