Prosperity and Inequality – 43 percent of the world’s 1,645 billionaires were from emerging markets in 2014

Prosperity is not necessarily a result of crony capitalism, unfair business advantages or control of natural resources, monopolies, and favoritism. In fact, a new billionaire class has emerged that is testimony to innovation, creativity, ingenuity, and other capitalist skills traditionally associated with advanced economies. Far from disadvantaging poor and middle-class workers, these billionaires have compiled an impressive record of providing employment opportunities that have raised living standards and increased economic stability in countries that have not always enjoyed success in these areas.

Entrepreneurs who build large companies are becoming increasingly common in emerging markets. Before the growth spurt of the 2000s, the vast majority of the superrich outside advanced countries inherited their wealth, made it from resources, or reaped unearned benefits accrued not from productive investment but from government connections, government-sanctioned monopolies, or privatizations that benefited people with connections. This group of so-called rent seekers or rentiers got rich not from supreme talent or innovation but because of commodity price movements and/or government connections.

Today an expanding group of successful emerging-market entrepreneurs building large companies is getting extraordinarily wealthy. Many are transforming global markets as their companies compete for customers and investment opportunities around the world. In 2004 just 20 percent of the 587 billionaires identified by Forbes in its World’s Billionaires List were from emerging markets. A decade later 43 percent of the world’s 1,645 billionaires were from emerging markets. More than 500 emerging-market fortunes were added over this period, and founders of non-resource-based, nonfinance companies contributed more to that growth than any other group.

These gains are reflected in the lists of the largest companies, which show a similar trend. Emerging-market firms made up 30 percent of the 2014 Fortune 500 list, more than twice their share a decade earlier. Forbes Global 2000, a list of the world’s 2,000 largest companies, shows the same expansion. Given current trends, by 2025, 45 percent of Fortune 500 com- panies and 50 percent of the world’s billionaires are expected to come from emerging markets.

These business leaders are helping drive emerging-market growth. Because an increasing share of the new money is earned from innovative companies, as opposed to rents and inheritance, it is associated with job creation and growth. The effects are extending beyond local markets. Many entrepreneurs are gearing their products to foreign markets, building sub- sidiaries around the world, and enhancing global competition. Although a sizable share of wealth still accrues to owners of property and resources (inducing distributional rather than productive consequences), large-scale entrepreneurship is growing rapidly in the developing world. 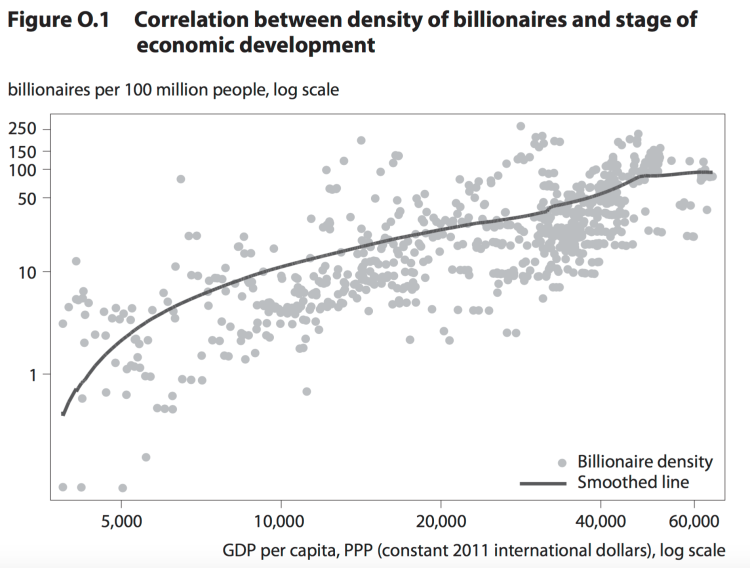 Like Loading...
« Prime-Age Men in US – 1.4 million dropped out of work
The Gig Economy in US – About 1% of adults having tried one at some point »