“McKinsey’s latest RRI research shows that a strong majority of Canadian households are on track for a secure retirement. However, 17 percent of households are not on track. Targeted solutions would help Canada address the lack of readiness of these households fairly and efficiently, while remaining a good steward of the economy.”

This report is based on a 2014 update to McKinsey’s initial retirement readiness research, conducted in 2011. Since then, the macroeconomic context has evolved significantly. Canada’s recovery from the financial crisis has been strong, with GDP growing at 2.2 percent annually between 2011 and 2014, residential real estate values continuing to rise, and equity markets returning to above 10 percent in most years following 2008. However, like most Western countries, Canada has an aging population, with the proportion of people over 65 expected to increase from the current 15 percent to 23 percent in 2035. Baby boomers have started to retire, putting increasing pressure on the existing system. But Canadians have been retiring later—the average retirement age shifted from 61.2 in 1997 to 62.1 in 2010 and further to 63 in 2013. The age of eligibility for the Old Age Security/Guaranteed Income Supplement (OAS/GIS) will gradually increase from 65 to 67 over 6 years, starting in April 2023. Also, OAS payments can now be deferred voluntarily to receive a higher payment in retirement and the Canada/Quebec Pension Plans (CPP/QPP) have been adjusted for individuals retiring before or after 65 years of age. These changes reflect the current economic environment and indirectly encourage people to work longer. 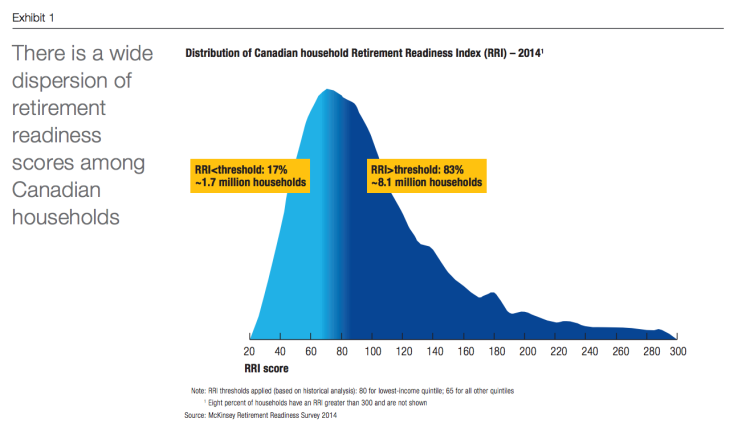 Like Loading...
« People with Disabilities in US – Recruiting, Hiring, Retaining, and Promoting: A guide for employers
Yahoo – To cut 100 to 200 jobs, mostly in Canada »