Youth unemployment around the world – Infographic

As America continues to slowly climb out of a recession, unemployment among youth still remains an issue. But Americans are not alone.  The lack of employment opportunities available to youth has become a global issue that could threaten the economic growth of several countries for years. According to the International Labour Office, nearly 75 million workers under the age of 25 were jobless last year worldwide. 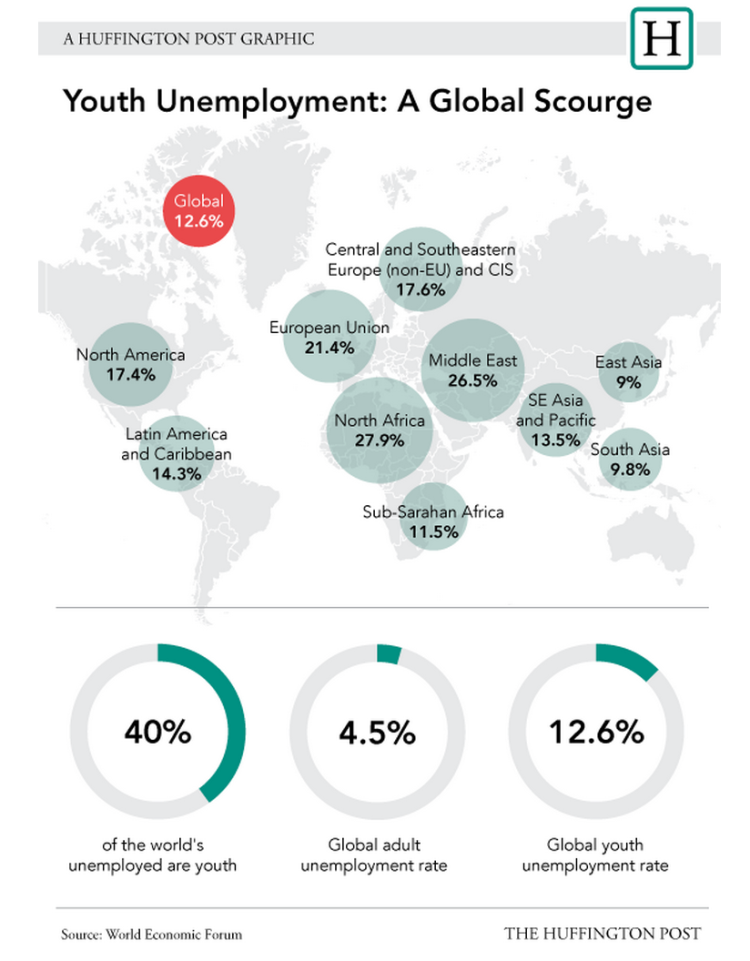 via The Unemployment Problem Is Impacting Youth Worldwide | Clutch Magazine.

The unemployment rate rose to 27.9 percent of the workforce in June, with 58.8 percent of young people jobless Continue reading »

Youth unemployment in Spain has reached a new high of 56.1%, a quarter of the 3.5 million under-25s jobless across the eurozone, according to the latest Eurostat figures. The number of young Spaniards belonging to what has become known as the lost generation is up 2% since June to 883,000. Only Greece has a higher … Continue reading »

Did you know we have a youth unemployment problem? Employers of every size in every sector lament the lack of skills available to them in the talent pool.  Whether you’re reading reports from McKinsey, the Georgetown University Center on Education and the Workforce, or countless other research organizations, the message is all too similar:  our … Continue reading »

Rising youth unemployment could endanger Asia’s social stability. Asia must come to grips soon with the growing number of unemployed young people or it risks increasing social problems or even violence, as witnessed in cities in Europe and throughout the Arab world, say labour specialists. “Seventy-five million youth, under the age of 24, across the … Continue reading »

There is no issue more important than Global Youth Unemployment

Last week, Secretary Kerry made his first speech as Secretary of State at the University of Virginia where he spoke about the importance of our foreign policy, especially for young people.  He said “In countries across North Africa and the Middle East, the majority of people are younger than 30 years old.  About half are … Continue reading »

Youth unemployment in the Arab region is the highest in the world, according to a report by the U.N. International Labour Organization (ILO) released on Tuesday. The investigative body stated that the Arab uprisings have exposed skewed development policies, social justice deficits and over twenty years of poorly managed economic liberalization. “As a region, youth … Continue reading »

India, one of the youngest countries in the world, where youth accounted for 20% of the total population in 2011, according to the Registrar General of India. More importantly, the dependency ratio – the number of children and elderly people per working-age person — declined 21% over the last three decades. In China, the ratio … Continue reading »

Youth guarantees Programmes that guarantee young people will get a job, education or training have shown good results in a number of countries. In Finland, the success rate of the youth guarantee scheme is estimated at more than 80 per cent. A registered youth has to be offered a job, academic education, vocational training, or … Continue reading »

Like Loading...
« Mothers in US / More fatigued than dads
Recruiting and Social Media / Extraverted candidates prone to postings related to alcohol and drugs and those low in agreeableness in online badmouthing »