Inequality on the rise in most OECD countries

“In the three decades prior to the recent economic downturn, wage gaps widened and household income inequality increased in a large majority of OECD countries. This occurred even when countries were going through a period of sustained economic and employment growth” writes the OECD in its 2011 report An Overview of Growing Income Inequalities in OECD Countries. (Adapted choosen excerpts by Job Market Monitor to follow)

Over the two decades prior to the onset of the global economic crisis, real disposable household incomes increased by an average 1.7% a year in OECD countries. In a large majority of them, however, the household incomes of the richest 10% grew faster than those of the poorest 10%, so widening income inequality. Differences in the pace of income growth across household groups were particularly pronounced in some of the English-speaking countries, some Nordic countries, and Israel. In Japan, the real incomes of those at the bottom of the income ladder actually fell compared with the mid-1980s.

In OECD countries today, the average income of the richest 10% of the population is about nine times that of the poorest 10% – a ratio of 9 to 1. However, the ratio varies widely from one country to another. It is much lower than the OECD average in the Nordic and many continental European countries, but reaches 10 to 1 in Italy, Japan, Korea, and the United Kingdom; around 14 to 1 in Israel, Turkey, and the United States; and 27 to 1 in Mexico and Chile.

The Gini coefficient, a standard measure of income inequality that ranges from 0 (when everybody has identical incomes) to 1 (when all income goes to only one person), stood at an average of 0.29 in OECD countries in the mid-1980s. By the late 2000s, however, it had increased by almost 10% to 0.316. Significantly, it rose in 17 of the 22 OECD countries for which long-term data series are available (Figure 1), climbing by more than 4 percentage points in Finland, Germany, Israel, Luxembourg, New Zealand, Sweden, and the United States. Only Turkey, Greece, France, Hungary, and Belgium recorded no increase or small declines in their Gini
coefficients.

Increases in household income inequality have been largely driven by changes in the distribution of wages and salaries, which account for 75% of household incomes among working-age adults. With very few exceptions (France, Japan, and Spain), the wages of the 10% best-paid workers have risen relative to those of the 10% lowest paid. This was due to both growing earnings’ shares at the top and declining shares at the bottom, although top earners saw their incomes rise particularly rapidly. Earners in the top 10% have been leaving the middle earners behind more rapidly than the lowest earners have been drifting away from the middle.

Evidence as to the role of globalisation

A number of international cross-country studies find trade integration to have increased inequality in both high-wage and low-wage countries, which is at odds with traditional trade theory. Other studies, by contrast, suggest that rising imports from developing countries are actually associated with declining income inequality in advanced countries. Recently, some leading trade economists have changed tack from their earlier views that the effect of trade on inequality was modest at best: they now consider that globalisation may have had a more significant.

Other explanations for the growing inequality

Technological progress in particular is often cited. For example, advances in information and communication technology (ICT) are often considered to be skill-biased and, therefore, an inequality-increasing factor. Some studies put the ICT revolution at the forefront of their explanation of inequality: the IMF, for example, found that “technological progress had a greater impact than globalisation on
inequality within countries”, while an OECD report suggests that “technical
change is a more powerful driver of increased wage dispersion than closer trade
integration”. In practice, however, it is very difficult to disentangle technological change from globalisation patterns that also increase the value of skills. Advances in technology, for instance, lie behind the fragmentation of economic activities and the offshoring of production. As Freeman puts it, “offshoring and digitalisation go together”.

Finally, policy choices, regulations, and institutions can have a crucial impact. They
can shape how globalisation and technological changes affect the distribution of income.

They can also influence income distribution directly, e.g. through deregulation in product markets, changes in social transfers, wage-setting mechanisms, or workers’ bargaining power. However, connecting these factors with overall earnings inequality and household income inequality is not straightforward, as regulatory and policy reforms may have counteracting effects on employment and wage inequality among workers.

In the two decades from 1980 to 2008, most OECD countries carried out regulatory
reforms to strengthen competition in the markets for goods and services and to make labour markets more adaptable. All countries, for example, significantly relaxed anticompetitive product-market regulations and many also loosened employment protection legislation (EPL) for workers with temporary contracts. Minimum wages also declined relatively to median wages in a number of countries between the 1980s and 2008. Wage setting mechanisms also changed: the share of union members among workers fell across most countries, although the coverage of collective bargaining generally remained rather stable over time. A number of countries cut unemployment benefit replacement rates and, in an attempt to promote employment among low-skilled workers, some also reduced taxes on labour for low-income workers (Figure 4).

These changes in policies and institutions affected the ways in which globalisation
and technological changes translated into distributional changes.

Regulatory and institutional changes tend to have contrasting effects on employment and wage distribution – i.e. they tend to increase employment opportunities while, at the same time, contributing to wider wage disparities. However, the combined influence of these factors on overall earnings inequality and household income inequality is less straightforward. Promoting employment opportunities for under-represented groups could increase market income for certain households and increase the overall resources available for redistribution. At the same time, rises in the overall employment rate do not necessarily have a direct impact on reduced household income inequality.

Combining the employment and wage effects reveals that they tend to cancel each other out and that the net effect of regulatory reforms on trends in “overall earnings inequality” remains indeterminate in most cases.

The central role of education

The rise in the supply of skilled workers considerably offset the increase in wage dispersion associated with technological progress, regulatory reforms and institutional changes. The upskilling of the labour force also had a significant impact on employment growth. The growth in average educational attainment thus appears to have been the single most important factor contributing not only to reduced wage dispersion among workers but also to higher employment rates. On the basis of these results, the evolution of earnings inequality across OECD countries over the past few decades could be viewed mainly as the difference between the demand for and supply of skills or, as neatly summarised by Tinbergen, the outcome of a “race between education and technology”. 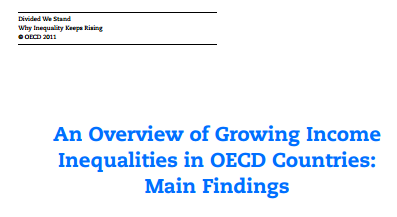 6 thoughts on “Inequality on the rise in most OECD countries”