We face a 9 million jobs gap between the number of jobs we have and the number we need, and this doesn’t even address the low quality of the jobs being created. 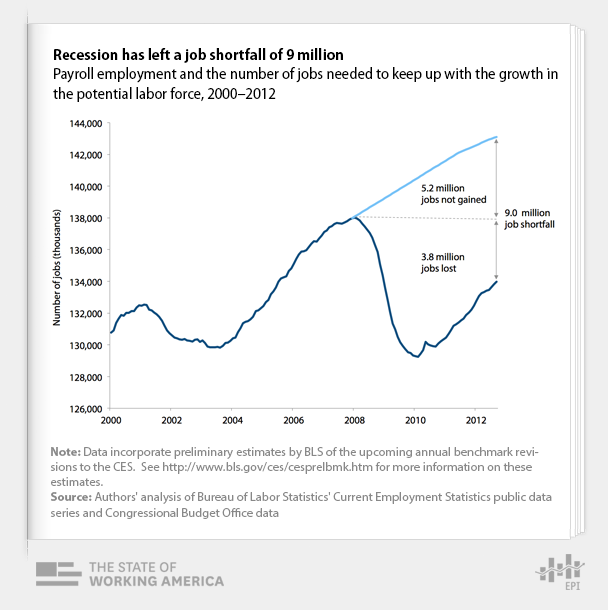 As Heidi Shierholz, the author of the post, explains:

The labor market has added nearly 5 million jobs since the post-Great Recession low in Feb. 2010. Because of the historic job loss of the Great Recession, however, the labor market still has 3.8 million fewer jobs than it had before the recession began in Dec. 2007. Furthermore, because the potential labor force grows as the population expands, in the nearly five years since the recession started we should have added 5.2 million jobs just to keep the unemployment rate stable. Putting these numbers together means the current gap in the labor market is 9.0 million jobs. To put that number in context: filling the 9 million jobs gap in three years — by fall 2015 — while still keeping up with the growth in the potential labor force, would require adding around 330,000 jobs every single month between now and then.

Unfortunately, our “job creators” only created 171,000 net jobs in October. And that was considered a relatively good month.   The chart below, from the Center on Budget and Policy Priorities,  gives a sense of what we are up against.

via The Jobs Gap » Sociological Images.

The extensive Job Gap as tremendous impact. According to the 2012 of the ILO report on Global Employment Trends(GET), the world facesa Global Job Gap of 600 million jobs. The Brookings’ Hamilton Project “updates America’s job gap, the number of jobs that the U.S. economy needs to create in order to return to pre-recession employment levels while absorbing the 125,000 … Continue reading »

It will take until 2020 to close the Job Gap

U.S. jobs growth may have picked up earlier this year, offering the millions of unemployed hope that better days are ahead. But once again, the government’s monthly unemployment report comes with disappointing news. In April, the nation’s employers created 115,000 positions, after adding 154,000 in March, the Labor Department reported Friday. This was less than … Continue reading »

The labor market has added nearly 5 million jobs since the post-Great Recession low in Feb. 2010. Because of the historic job loss of the Great Recession, however, the labor market still has 3.8 million fewer jobs than it had before the recession began in Dec. 2007. Furthermore, because the potential labor force grows as … Continue reading »

” The recovery is real, but it’s still really far from the recovery we need” writes Matthew O’Brien in The Scariest Jobs Chart, Private Sector Edition. (Choosen excerpts by JMM to follow) That’s been the consistent message of the past three years, with consistent job growth that hasn’t been near enough to end our jobs crisis much … Continue reading »

The current weak economic recovery will keep unemployment rates in OECD countries high until at least the end of 2013, according to a new OECD report. The Employment Outlook 2012 says that the OECD-wide joblessness rate is forecast to remain high at 7.7% in the fourth quarter of 2013, close to the 7.9% rate in May … Continue reading »

Job Gap – Employment Policy – It is the right time

Faced with a jobs crisis, policymakers the world over are digging deep into their policy toolkits to generate more employment. A recent study by the IMF’s Fiscal Affairs Department argues that reforms of tax and expenditure policies offer great promise in helping countries confront the jobs crisis, including in the short term. The study argues … Continue reading »

Job Gap is extending and has entered a new, more structural phase as austerity prevails says ILO who calls for a Global Job Pact

The World of Work Report 2012 provides a comprehensive analysis of recent labour market and social trends, assesses risks of social unrest and presents employment projections for the next five years. The report emphasizes that while employment has begun to recover slowly, job quality is deteriorating and there is a growing sense of unfairness. Moreover, … Continue reading »

The neglect of credit and debt in economic theory continues to produce muddled policy thinking. Take the tendency to protect banks lock, stock and barrel, at huge costs. The mantra is that if we let banks go bankrupt, that will ruin the economy. This is a nifty inversion of the truth: it is precisely the … Continue reading »

Almost nine million people in the European Union were considered “underemployed” in 2011, according to new Eurostat figures. These numbers add to the growing ranks of nearly 25 million unemployed in the EU, highlighting a ticking social time-bomb. Some 42 million workers in the EU were employed part-time in 2011, according to a survey by … Continue reading »

UK Job Gap summed up in one chart

Yesterday I wrote that the ‘recovery’ in the labour market was driven part-time and precarious work and marked by falling real wages writes Duncan Weldon. The chart below sums up many of the outstanding issues: Source: Read more @ Our jobs problem summed up in one chart | Liberal Conspiracy. Related article Job Gap | 600 … Continue reading »

EVER since the deep recession hit four years ago, many colleges have been rethinking their continuing education programs, straining to figure out how best to help the many unemployed Americans who have looked to them as a lifeline. With the unemployment rate still stubbornly high, this rethinking has led to a powerful trend in which … Continue reading »

14 thoughts on “The American Job Gap”